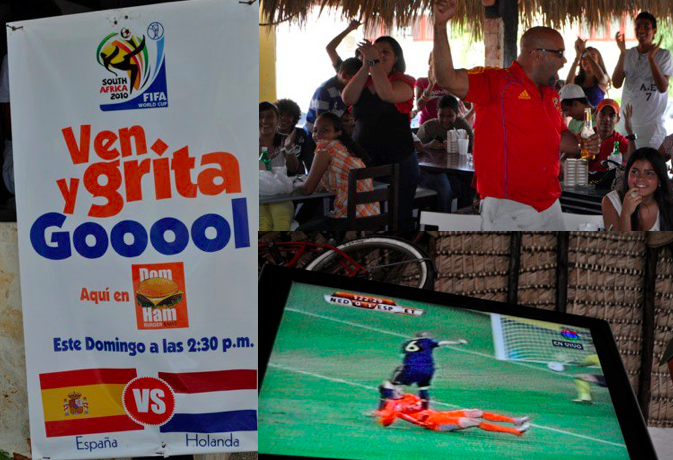 Last Sunday the 11th of July was the ‘Final del Mundial 2010,’ otherwise known as the World Cup Final, which was celebrated with some enthusiasm at Dom Ham burger joint in La Romana.

The match between Spain and Holland began at 2:30PM (Dominican time) and brought a large crowd to Dom Ham to watch the exciting game whilst enjoy a few good German beers and no doubt a few of Dom Ham’s best delicacies: churrasco, sausages and of course the burgers. Casa de Campo Living LOVES Dom Ham, to read our review about how wonderful Dom Ham is, click here.

The game as you I’m sure you know was won by Spain in the last few minutes of over-time – making it a rather exciting/nerve-racking game, of course for me who had 100% faith in Octopus Paul’s prediction, I knew Spain would win.

Unfortunately, I was unable to attend the fetsivities at Dom Ham – but from the following photos sent to us from Carlitos Pichardo (owner of Dom Ham), it certainly looks like everyone had a good time!