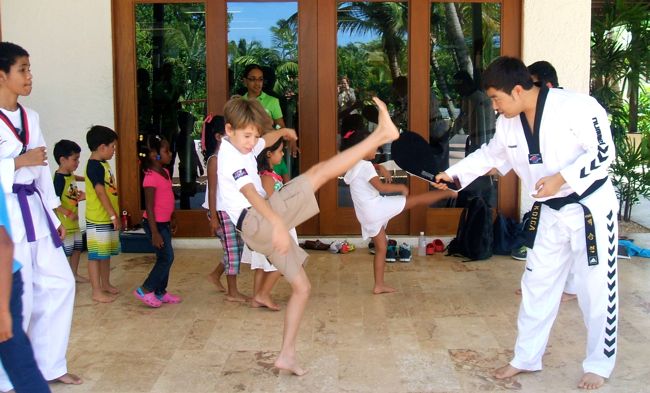 Last Thursday the 19th of July 2012, 2 specialized Korean Taekwondo instructors oferred clinics of this wonder martial art to a group of boys and girls who attended the Casa de Campo Summer Camp – and starting from NOW, the Korean instructors will be, from time to time, giving special Taekwondo clinics at the Casa de Campo hotel!

On Thursday, the special Taekwondo lessons were given by Jae Hong Moon, experienced instructor who directed the Taekwondo team at the Shanghai University of Sport in China, along with Seung Hyun Baek, who comes from the prestigious Kyoung Hee University in Korea – and it was FABULOUS! The little ones learnt numerous techniques of this ancestral martial art – just one of the many activities which made up their fun-filled day at the Casa de Campo Summer Camp!

The instructors, who as volunteers have come to the Dominican Republic as part of an agreement between the Dominican Taekwondo Federation, directed by Arquímides de Jesús (who is also the director of the Taekwondo Academy in Casa de Campo) and the International Korean Agency of Cooperation- KOICA. Jae Hong Moon and Seung Hyun Baek will be in the country for a period of two years to give lessons to those Dominicans interested in this art.

However the GREAT news for all Casa de Campo residents and villa owners is that both Jae Hong Moon and Seung Hyun Baek have promised to offer classes at the Taekwondo Academy in Casa de Campo, which has been available at the hotel’s gym since 1987 offering Taekwondo classes for children of ages 4 and above.

Here are all the details:

When: Tuesdays and Thursdays, 4 p.m.