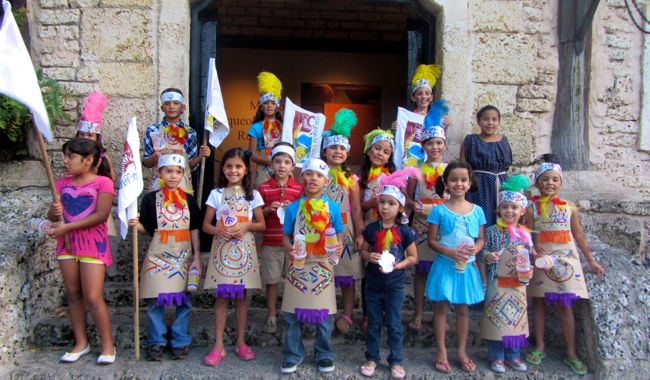 “Diablo Cojuelo que ‘ta pinta’o de amarillo y colora’o”! OnFriday the 15th of February 2013, whistles, drums, vivid colours and contagious Dominican rhythms were definitely present at a wonderful parade of mini taínos who danced along in the Altos de Chavon Plaza, during the celebration of the “Kids’ Carnival”, an excellent initiative organised by the Regional Archaeological Museum and the Altos de Chavón amphitheatre as a way of gathering members of the community to celebrate one of the Dominican Republics most popular cultural events; the Dominican Carnival!

The wild fun started around 5pm when more than 20 little boys and girls happily arrived at the Regional Archaeological Museum of Altos de Chavón, where, instructed by Yanet Castillo and the rest of her team, not only did they learn how to make their own “maracas”, decorate their costumes and paint their faces like our taínos (native Indians) once did, but they also learnt about the many fascinating stories and fun facts that lie beneath the many interesting traditions and popular characters that participate in the Dominican Carnival!

But the best part was definitely the moment when, dressed in their cute indian costumes, they went out onto the main Altos de Chavon Plaza – for the Kids’ Carnival, led by three funny “tropical” and energetic clowns. Here the kids enjoyed a series of dances, competitions, balloons, and were joined by traditional Dominican Carnival characters; the “Diablo Cojuelos”, “Roba la Gallina”, as well as a beautiful Dominican girl dressed in typical Dominican dress.

The party was enjoyed by kids, parents and visitors in the midst of cotton candy, pop corn, drinks, laughter and much more!!

Here we share a selection of photos taken during the “Kids Carnival” celebrated in the Altos de Chavon Main Plaza last Friday the 15ht of February 2013:

On Saturday the 23rd of February 2013, a traditional “Carnaval Dominicano” took place in the Marina Casa de Campo – which normally admired for it’s beautiful architecture and relaxed ambience akin to the best marina’s of Italy – came to life with all the excitement, vibrant colors, drums, music and festive ambience synonymous with the Dominican Carnival season as experienced in La Romana, Santo Domingo or La Vega.