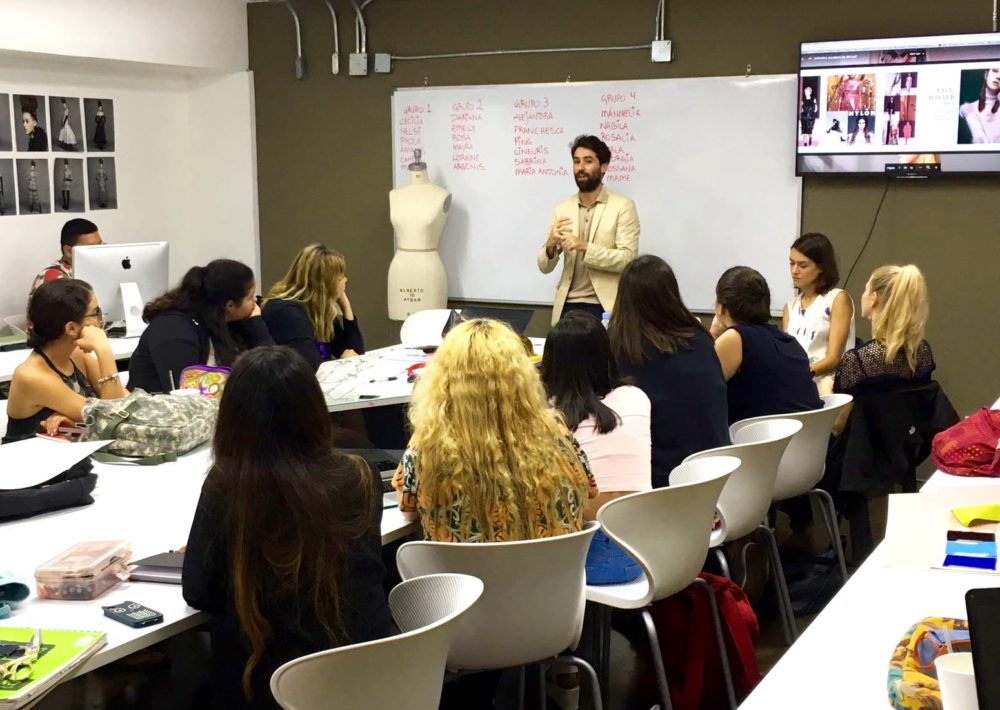 Surrounding the events of Dominicana Moda 2016 that culminated Saturday evening with the grand finale of Spanish fashion designer Juan Vidal’s Spring/ Summer 2017 collection, Mr. Vidal also visited the fashion design students of the Chavón School of Design in Santo Domingo earlier in the week. The very simpático designer accompanied by fellow crew members and family, Dominicana Moda’s stylist and CEO, Sócrates McKinney, along with Dominque Bluhdorn and Adolfo Lucero, president of the Altos de Chavón Cultural Center Foundation and director of the Chavón School of Design in Santo Domingo, respectively, met with the students in a discussion about his career background and rise to success that wasn’t all a walk in the park.

The young designer who was born in 1980 came from humble beginnings in Alicante, Spain from a family of generations of tailors. Traditionally all in menswear, Mr. Vidal became the first in his family to take an interest in womenswear, and went to school at the University of Barcelona and specialized in fashion at the Felicidad Duce (the School of Higher Education in Fashion Design of LCI Barcelona). Eager to make a mark in the world with his clothing line, he entered into as many contest and competitions as possible to gain exposure, and moved frequently from town to town to enhance his creative pool. As the designer himself explained, “If you are someone who stays too long in a place, you become stagnant and it’s not good for creativity.”

First living in Barcelona, he relocated to Valencia in the south of Spain for a few years and positioned himself in a way to be able to showcase his collection in Madrid’s Fashion Week. A turning point in the young designer’s career came when he returned from Moscow’s Fashion Week that promoted the public to ask: “He’s so talented. Why does he have to go so far?” Nowadays, Juan Vidal’s clothing can be found in Russia, Spain and Canada, and frequently is worn by Queen Letizia of Spain. It’s possible the two have an on-going collaboration as the designer is hush-hush about talking on the subject. When prompted by Maria Amelia Martinez, one of Chavón’s fashion students, “What was it like to dress the Queen?” he referred to his confidentiality agreement.

In front of a classroom of enthusiastic listeners, Mr. Vidal stood casually with attractively coiffed hair and easily filled the air with descriptions, stories, and good words of advice. It was clear he came prepared with exactly what he wanted to say to these impressionable students. The most significant message he stressed was the importance of perseverance and “never giving up”. Throughout his early career, he often made Facebook pages and photographed his friends in his clothing trying emphatically to ‘get out there’. It certainly paid off! We hope you had a chance to see his sleek, fluid and vibrant collection in Dominicana Moda. Following his chat at the Chavón School of Design, Marina Spadafora, director of the Fashion Design department and professor who had put a pin in her lecture on the history of fashion headwear, resumed class albeit with a bit of difficulty as the students, and young ladies in particular, fawned over the talented and amiable newfangled designer. Stay tuned for our report on his show and more from Santo Domingo’s 2016 Fashion Week!

The Altos de Chavón Cultural Center Foundation, located in Dominican Republic, is a non-profit cultural and educational institution. Since 1983, it has been dedicated to the creation of a multifaceted arts community that includes visual arts, crafts workshops, performing arts and teaching programs.

With its other components—The Regional Museum of Archaeology, the Artists in Residence program, The Gallery, and The School of Design—The Foundation has contributed to the enrichment of the intellectual, artistic, and cultural panorama of the Dominican Republic for more than 30 years.

The Foundation’s work has reached many, with impressive results. Its diverse educational and arts programs, gives Altos de Chavón the cultural dynamism that nourishes and stimulates the creativity of the designers and artists of today and tomorrow.

In 2013, The Altos de Chavón Cultural Center Foundation celebrated 30 years of continuous and invaluable contributions to art and culture in the Dominican Republic giving each artist the opportunity to find their individual expression through constant research and development.