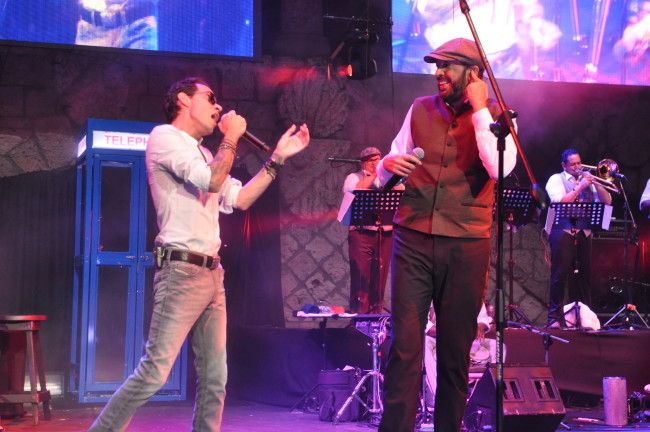 It’s been an unforgettable year for the Altos de Chavón amphitheater, closed with a “broche de oro” this past Wednesday evening December 30, 2015 when the best of the Dominican Republic (Juan Luis Guerra) collided with the best of Puerto Rico (Marc Anthony) for an unforgettable night on the cobbles.

Returning for his second performance of 2015 at the Altos de Chavón amphitheater, Dominican heart throb and Latin music idol, Juan Luis Guerra brought the house down with his greatest hits across the decades. Among them “La Bilirrubina,” “Ojalá que llueva Café,” “Tus Besos” and “Todo Tiene Su Hora.”

And then came the moment all had been hoping for… The appearance of Salsero and Casa de Campo villa owner, Marc Anthony. To the screams of the more than 5,000 fans, the duo performed “Ojalá que llueva café,” followed by “Tu amor me hace bien.”

In 2016, Casa de Campo already has another great concert planned and scheduled. Save the date for Ricky Martin in Altos de Chavón on February 6, click here for more details.

The following collection of photos were taken by Rafael González December 30th: