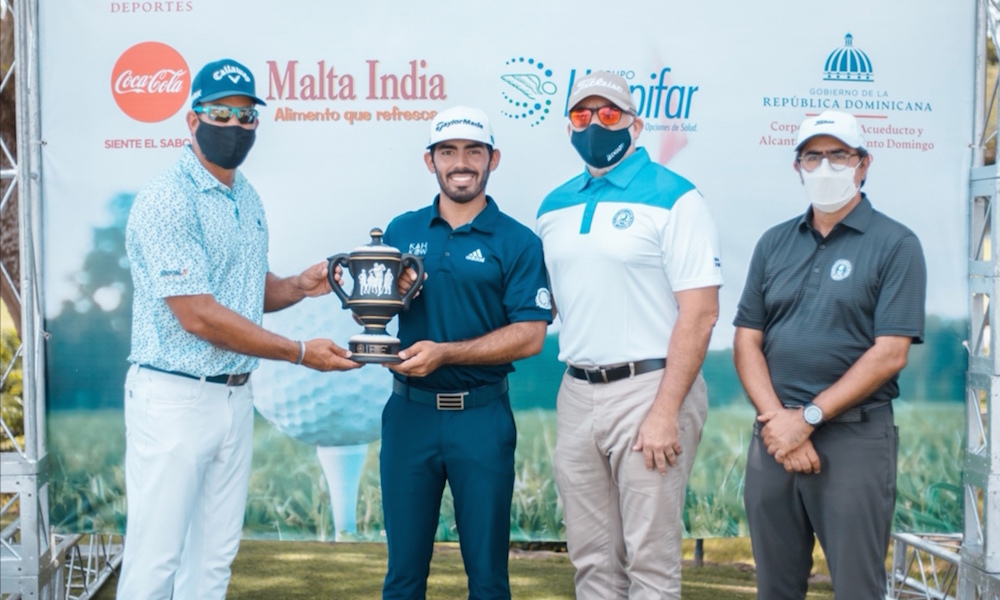 The Dominican Golf Federation (Fedogolf) held this past weekend the LIII edition of the National Championships with the participation of more than 150 players. This year’s tournament took place at Teeth of the Dog, Dye Fore and The Links golf courses in Casa de Campo and was dedicated to the memory of the late athlete Kalil Haché Malkum.

As part of the tournament program on Saturday, Fedogolf managers Carlos Elmúdesi, Robert Guerra and Federico Lebrón presented a plaque of recognition to Maribel Haché, daughter of Kalil and Arístides Fernández Zucco (El Chato), son-in-law. “Golf was a sport that captivated my dad in recent years,” Maribel said, visibly moved.

“He fell in love with golf, but what he most appreciated was spending time with his golfing friends. Those hugs were everything to him. Thank you very much, for us this recognition is an honor, grateful for your gesture in honoring his memory,” added Maribel.

For his part, Elmúdesi, president of Fedogolf, highlighted the qualities of Kalil, who he said was a firm supporter of Dominican golf. “At all golf events Kalil wanted to help. Kalil was a beloved individual, loved by the golfing community; he will be missed,” said the Fedogolf president. Kalil Haché Malkum, who died in March of this year, was a consecrated man of the national sport in all its manifestations.

The following day, after the event ended, the golfer Juan José Guerra was crowned grand champion of the National Championships. Guerra, a professional athlete, shot 67-70-67 in three rounds (204), being the best player in the 53rd version of the Championships, held at the Diente de Perro, The Links and Dye Fore fields, in Casa de Campo. , where more than 150 players took part.

Rhadames Peña was the Amateur champion with a score of 212 in three days. The prodigy Julio Ríos was national runner-up and youth champion, with 221 strokes.

Camila Yoo was crowned champion among Ladies A, with a score of 252. Mar Caimari seconded her one more stroke.

Smeling Rodríguez took three hits from Raúl Linares 226, to be crowned in the Mid-Amateur category. Linares is the runner-up.

The international champion was the Puerto Rican Andrés Aranguren, with 220 strokes.

Jacinto Sims was the winner of the AA, with 155, one more than Franklin Frías, runner-up.

In Senior A, Luis Namnum, with 164 was the champion, one more shot from Héctor Then, runner-up.

Maireni Bournigal won the Super Senior with 156 strokes. Federico Valverde, with 162 is the runner-up.

Eddy Ramírez and Luis Polanco, champion and sub in Category B, with scores of 159 and 167.

Alexander Pérez was the champion in C, Francis Marte in Senior C and Edward Marte in D.

The event had the Ministry of Sports as a sponsor, in addition to Bepensa Dominicana, la CAASD, Cervecería Vegana, Hospifar, Grupo Rica and La Licorera.

[* Photos and information from Fedogolf Press]