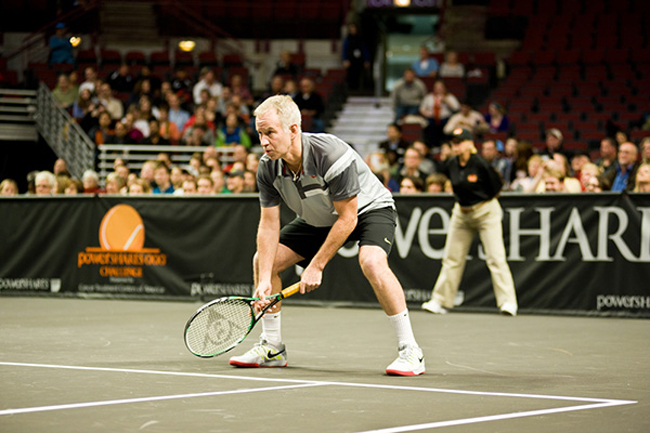 Attention to all of the tennis players and fanatics out there! Here we bring the schedule, prices and other details of John McEnroe’s visit to Casa de Campo!

The excitement and the adrenaline of this great event will begin on Friday the 7th of November, at 3pm, with an exhibition match between John McEnroe and Jim Courier, two of the greatest American tennis players of the last 40 years. This great exhibition match will take place at Casa de Campo’s La Terraza Tennis Club where an extended viewing area for 500 spectators will be created.

Not only that, but later these two legends of tennis will partner up and will compete against some of Casa de Campo’s top professional tennis players, most likely Pedro Nolasco and Francisco Concepción, while some lucky Casa de Campo villa owners will also get the chance to play with John McEnroe and Jim Courier too! How exciting!

On the evening of Friday the 7th of November, the excitement will continue with an elegant dinner at the Flamboyant conference center. A fun and intimate dinner with space for just 300 guests who will enjoy a live question and answer session with John McEnroe himself.

On Saturday 8th of November, the legends move on to another important factor of the Sporting Life in Casa de Campo: golf. John McEnroe and Jim Courier will participate in the 3rd La Romana – Bayahibe Golf tournament, that will take place at Dye Fore golf course, here in Casa de Campo, teeing off at 8am. Click here for golf tournament details and to register!

When: Friday 7th of November, from 3pm

When: Friday 7th of November, 8pm

McEnroe is regarded as one of the most talented and well-known players in tennis history. He won seven major singles titles, including four at the US Open (1979-1981, 1984) in his hometown of New York, in addition to winning 10 other major titles in doubles and mixed doubles. He won Wimbledon three times (1981, 1983-1984), and was involved in perhaps the greatest Wimbledon final of all time, losing to Bjorn Borg in 1980, featuring the famous 18-16 fourth-set tie-breaker. McEnroe helped the United States win the Davis Cup five times and he captured 77 career singles titles and 78 career doubles titles, his last being in San Jose, California in 2006 at the age of 47. Age 55, McEnroe recently won the points title on the 2014 PowerShares Series champions tennis circuit, prompting Courier to label him as the “greatest 55-year-old tennis player to ever grace the earth.”

Courier is regarded as one of the most tenacious tennis players of all time – and with one of the biggest forehands – that led him to a pair of French Open titles in 1991 and 1992 and two Australian Open titles in 1992 and 1993. In 1992, he became the first American to reach the No. 1 ranking on the ATP World Tour since McEnroe in 1985. In 1993, Courier was the youngest player to reach all four major singles finals in a career when he reached the Wimbledon final in 1993 at age 22. He also guided the U.S. to Davis Cup titles in 1992, where he was teammates with McEnroe, Pete Sampras and Andre Agassi on the described U.S. “Dream Team,” and again in 1995. He currently serves as the captain of the U.S. Davis Cup team and competes on the PowerShares Series tennis circuit.

Here in Casa de Campo Living we look forward to seeing you all at this great event – and as soon as we have more specific details we will let you know!!