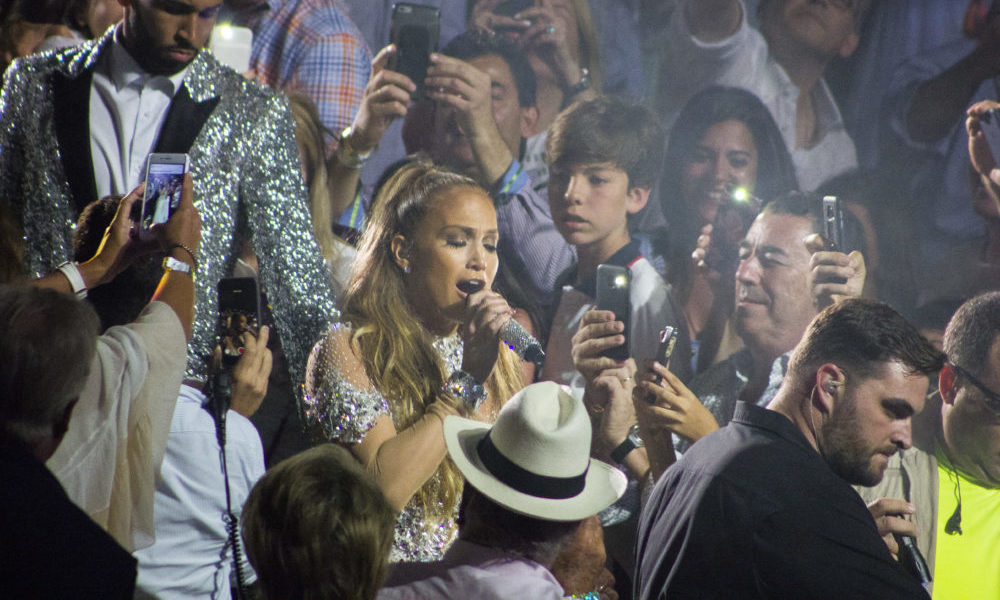 When female singers perform, it’s a whole different ballgame. Fashion for one takes a spotlight in entertainment with multiple wardrobe changes, glittery costumes from head to toe, and in the case of Jennifer Lopez, even her own style of Yankee apparel. The triple threat artist graced the iconic Altos de Chavón stage last Saturday night with more than a few things to say…and do.

In recent concerts, we’ve seen performances by several Latin American male stars, including Marc Anthony, Gente de Zona, Ricky Martin, Zion & Lennox, J Balvin, Carlos Vives, Juan Luis Guerra and more, but it’s been awhile since a female artist has taken the stage. For this long awaited appearance, Gamal Hache of Bravo Entertainment hit the mark by securing none other than one of America’s sultriest singers and celebrity phenomenons. Jennifer Lopez does it all; she’s a singer, actress, dancer, fashion designer, entrepreneur, philanthropist, and mom of two; she also happens to be extremely nice and fun to talk to!

Going back to her roots, J.Lo’s first concert in the Dominican Republic included her all-time hits: “Waiting for Tonight”, “If you had my Love”, “Love Don’t Cost a Thing”, “I’m real”, “Get Right” and more. Dripping in beaded costumes, tight fringe bodysuits, and even a fur coat, J.Lo brought the glamour of Las Vegas, where she performs her show “All I Have” throughout the year, to Casa de Campo. Plus, in her hour-long concert, the girl from The Bronx didn’t stop moving for a single second. A rigorous routine of jumping in heels, salsa and hip-hop moves, and choreographed dances was carried out flawlessly. Her catchy lyrics brought nearly 5,000 cheering fans to their feet whose enthusiasm only heightened throughout the night.

This was especially the case when Jennifer showed off her impeccably trim figure and killer backside in “Booty”, and when she comically grabbed a baseball bat and donned her New York Yankees cap to make special acknowledgement to beau Alex Rodriguez in the crowd while singing, “Jenny from the Block”. A.Rod loved the sentiment and could be seen dancing during her songs.

Jennifer Lopez also gave special tributes to artists including Aretha Franklin when she performed “Respect” which was a great lead in to her Top 10 hit, “Ain’t Your Mama”, and she honored Cuban–born singing star, Celia Cruz with “Quimbara Kimbara”. Concert goers from the Dominican Republic and international fans who flew in to see J.Lo were not disappointed. Excitement further ensured from the crowd when guest stars Gente de Zona joined J.Lo on the stage for “Tu y Yo”, and directly after, notorious heartthrob Marc Anthony performed “Olvidame y Pega la Vuelta” with his ex-wife, which the pair recorded just last year.

Jennifer Lopez has broken records and had unprecedented simultaneous success in both film and music as an artist. She was the first to have the #1 album (“J.Lo”) and #1 feature film (“The Wedding Planner”) in the same week! Her dynamite performance rocked the Altos de Chavón outdoor amphitheater and she ended her concert with “On the Floor” which debuted in 2011 featuring Pitbull. It quickly became one of her most successful singles, and helped her earned American Music Award’s Favorite Latin Music Artist that year. We can all attest the lyrics, Live your life and stay young on the floor is a concept Jennifer Lopez has mastered.

Following her debut on the island, J.Lo posed in a meet-and-greet with special guests and CasadeCampoLiving.com had the chance to ask her: “Is it empowering to know that you’re an icon for women everywhere?” to which her face brightly lit up and she responded with genuine excitement: “It’s weird but it’s good, do you know what I mean?”

J.Lo and A.Rod spent the following day, Easter Sunday, in Casa de Campo before visiting a local charity for impoverished children in La Romana, the Fundación MIR, on Monday morning before their return flight home.

The following pictures were taken by Laura Perdomo on Saturday, April 15th at Jennifer Lopez’s concert in Altos de Chavón:

Following Jennifer Lopez’s impressive performance in Altos de Chavón just two days ago, the superstar arrived to the Fundación MIR schools earlier today with a bright smile on her face to meet and greet La Romana’s esteemed charity. She was ecstatic to see students and first said hello to a team of young baseball players from the school, who were there no doubt to show their admiration and enthusiasm for Alex Rodriguez who accompanied Jennifer to MIR. Read more here!