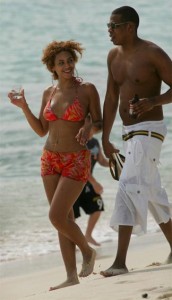 You may already be aware that Jay-Z and his wife Beyoncé were in Casa de Campo all of last week, and you surely heard the rumors and stories about Jay-Z’s birthday party, which took place last Friday the 4th of December in one of Casa de Campo’s largest and most flamboyant villas. Here we are able to bring you a first hand account of the party, from some special guests who were actually there!

The very original birthday bash was inspired by Al Pacino’s Scarface movie, and guests showed up dressed the part in a most faithful rendition of 40’s gang-style fashion: the gentlemen in elegant tuxedos and the ladies in magnificent gowns. Beyoncé wore a glittering, sexy white number, complete with ivory feathers and a long skirt, which at the end of the night was removed to reveal an even sexier shorter version. Jay-Z looked amazing in an impeccable white tuxedo.

On arriving at the party, guests were asked to check-in their cell phones and digital cameras to make sure there would be no sneak peeks. To start the festivities, there was a very touching video show – a recording made especially for Jay-Z by his friends and family to wish him a Happy Birthday, including some special guests who were unable to join the celebration.

At the end of the video, the exclusive group of less than 60 people moved outside to the swimming pool, where synchronized swimmers entertained attendees with an enchanting display reminiscent of Hollywood siren Esther Williams. Around midnight, they had a massive fireworks display, which if you were in Casa de Campo you definitely must have seen and heard! At exactly the same time, a second synchronized swimming show took place, after which you could say the ‘formal’ part of the evening was over – mostly because Jay-Z and his friends decided to take off their Tuxedo shirts, bow ties and jackets and proceeded to dance the night away, while Jay-Z himself performed a few of his own songs. At one point, the birthday boy obliged his guests with a fabulous rendition of his “Empire State of Mind” best-selling song, helped by the very talented Alicia Keys.

The star-studded guest list included P. Diddy, Lil Wayne, Kate Hudson and boyfriend Alex Rodriguez – who were spotted working out at the gym and shopping at Carmen Sol NEW YORK in the Marina Casa de Campo. There was also Alicia Keys, who shot part of the video for her award-winning song “Karma” three years ago at the amphitheater in Altos de Chavón. Alicia spent a few days here – for the party, but was also spotted on Playa Minitas. Kanye West, who is a regular visitor to Casa de Campo was also spotted in happy camaraderie with the local in-crowd at Onno’s bar only a few weeks ago. Some say to have seen Oprah and major leaguer Pedro Martínez, but we can’t positively confirm that bit of news. Close relatives of Jay-Z were also present on this special occasion, as were Beyoncés sister, Solange, and her mom Gloria – living proof of where her famous daughter gets her amazing looks. Also in attendance were a few very high-profile guests, who preferred to keep a much lower profile – and were only spotted at the party itself, Goldie Hawn and Naomi Campbell!