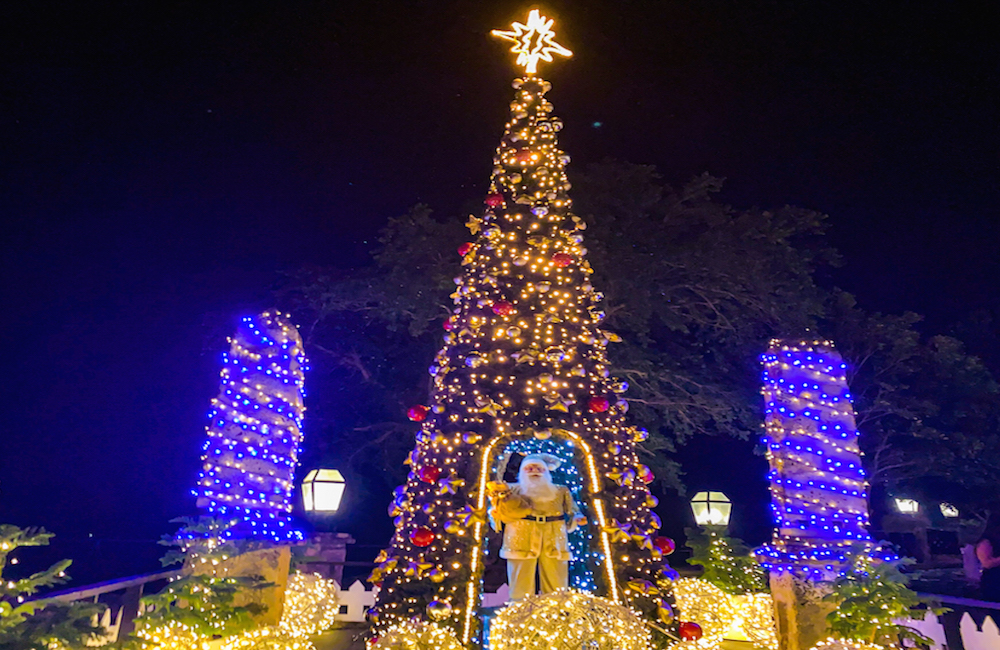 Last Friday, December 4th, we welcomed Christmas in the magical village of Altos de Chavón, with the lighting of the great Christmas tree and the many rooftops and cottages of Chavón. Every year, this event unites the Casa de Campo family, and this year, amidst everything that has happened and taking the necessary precautions, it became a beacon of hope for a brighter better new year.

This event has always been one of the most popular and most awaited events of the year. This is the 10th consecutive year that Altos de Chavón and Casa de Campo have been celebrating the festivities with various activities for its guests and residents here in Chavón! This time around the lighting ceremony took place at the Amphitheater and was live-streamed via all of Casa de Campo’s and Altos de Chavón’s social media channels.

The official ceremony began at 7:30 pm after Father Christian Mercedes’ blessing. Acting as the Mistress of Ceremonies was one of Casa de Campo’s own, Gabriela Reginato, who after welcoming the guests and those tunning in from home, read a letter from Santa, who sent his love and apologies for not being able to visit his vacation home in Altos de Chavón this year.

In the letter he asked all the kids and their families to continue taking care of themselves and promised that his elves are working hard so that he can deliver all the gifts this Christmas eve, ending the message hoping that he will be able to be with us next year.

Gabriela then turned the stage over to Mr. Andrés Pichardo, President of Casa de Campo Resort, Mr. Juan Velázquez, Vice President and Administrator of Costasur Dominicana, who expressed their gratitude for the continued support to the resort and assured everyone that they will continue working to make this a safe place to all who live here and visit, they also thanked all for helping Altos de Chavón continue such a beautiful yearly tradition.

After inviting the children at home and a few in the audience to help them countdown the start of Christmas, the grand button was pressed and Altos de Chavón lit up with all the lights that had been installed throughout the week. It is a truly magical and breathtaking moment and one that for us in Casa de Campo signified the beginning of Christmas!

Following the display of lights, a Christmas Concert with Batuta Chamber Orchestra conducted by Juan Pablo Polanco took place, playing traditional Christmas carols. The musical treat and wonderful fireworks display was a lovely end to the lighting ceremony. It was a beautiful and magical night… and this video captures that perfectly.

The following photos were taken by FEEDAD on Friday, December 4th in Altos de Chavón: