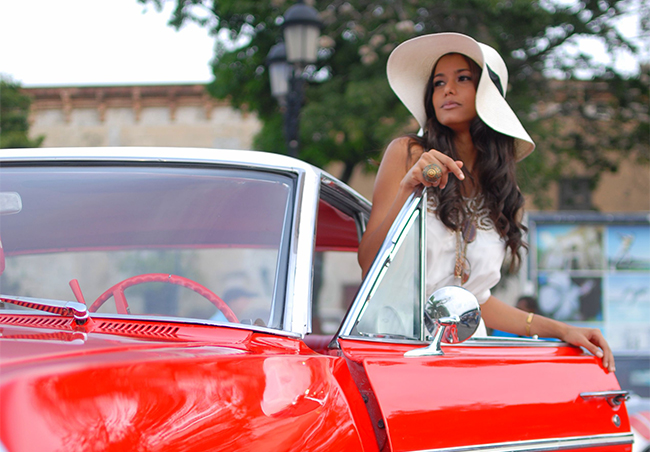 We had the pleasure of having a nice Q & A with well-known Dominican actress Evelyna Rodríguez, who played the lead role on the Sergio Gobbi film “La Extraña” shot here in our beautiful Casa de Campo.

We’ve seen Evelyna multiple times on the big screen, falling for a guy that’s “Ugly by day, pretty at night” (“Feo de día, lindo de noche”), as Elena Polanco in “Los Super”, as Miranda in “Quiero ser Fiel” and of course as Rosa in Sergio Gobbi film’s “La Extraña” shot here in our beautiful Casa de Campo. We had some questions for her, and she glady responded, not a strange lady at all, but very charming.

Click here for information and pictures of the premier of “La Extraña”.

@cdcliving: What was the moment you enjoyed the most while filming “La Extraña”?

Evelyna Rodríguez: Outside the crew after party, hahaha? the truth is we lived unforgettable moments, filled with laughter, complexity and also pressure, I can’t deny that; but filming “La Extraña”, the moment I enjoyed the most was when I was with Yorlla Castillo, I loved it, Sergio’s directing definitely influenced the process, but it was also fun the fact that two women got to defend their love so elegantly.

@cdcliving: What was your experience working with Sergio Gobbi?

Evelyna Rodríguez: Is and will always be very special, Sergio has the ability of getting the best out of his actors, I like the way he works, the ease in which he keeps the set, the confidence he transmits showing he knows what he’s doing, hopefully he gets motivated to do so more often and with me of course.

@cdcliving: How did you feel playing the role of Rosa?

Evelyna Rodríguez: To tell you the truth at first I was frightened, and very challenged, I had no idea of how I was going to do it, then as I built the character, owning every line I felt more motivated to keep going and create. Fortunate for the opportunity.

@cdcliving: What did YOU like the most of filming in Casa de Campo?

Evelyna Rodríguez: Without a doubt it was the attention, Casa de Campo’s family is so huge that wherever you are, you find someone willing to share a smile, help, friendship, I gained many friends.

@cdcliving: Have you done any research with specialist of one or multiple interpretations?

Evelyna Rodríguez: Yes of course, for “La Extraña” for example, I got together with two professionals specialised in conduct, in other cases depending on the specialty of the role I’ve always shared with people familiarized with the role’s situation to get to know the birth of those emotions and take it to the screen.

Thank you Evelyna Rodríguez for taking the time to answer our questions.