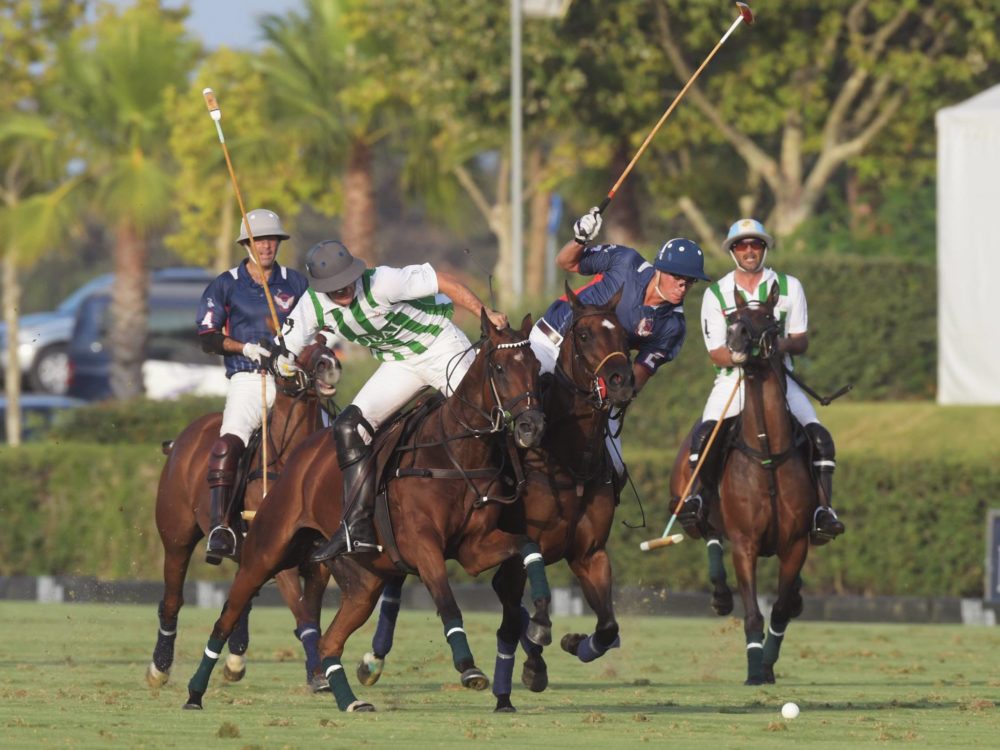 Summer polo may have wrapped up this year in Casa de Campo but that doesn’t stop teams from continuing to play the Sport of Kings overseas. In fact, the Polo Challenge RD is equally active and pursuing opportunities to promote the Dominican Republic as the up-and-coming hub for polo. Currently, the 45th International Tournament of INDI Polo is underway at Santa Maria Polo Club in Sotogrande in Cádiz, Spain, where competitions celebrate 22 goals of handicap, and see more than 80,000 visitors on average per year, while running from July 27th- August 28th. Casa de Campo and the Ministry of Tourism in the Dominican Republic are sponsors of the tournament!

The Casa de Campo Silver Cup High Goal Polo began on Thursday, July 28th and will conclude on August 12th. The teams within this cup include Dubai (currently in the lead with 2-0 wins), Ayaia (1-1), Brunei (1-1), Lechuza Caracus (1-1), and Dos Lunas (0-2). Seeing returning faces and 10-goal handicap players from the Polo Challenge RD, you’ll find Adolfo Cambiaso, David Stirling, and Juan Martín Nero. See the full rosters of teams below.  The next games in this cup will play this Sunday, August 7th, with Lechuza Caracus vs. Ayaia, and Dubai vs. Dos Lunas.

The Dominican Republic continues to position itself within the international community as an elite destination for polo. At the Guards Polo Club, located at Windsor Park in England, managers of the Polo Challenge RD gave a cocktail presentation to announce their 2017 polo season. The event took place under the Queen’s Cup, which is one of the most prestigious and glamorous sporting tournaments in the world, and saw hosts Mr. Rafael Torres, President of Casa de Campo, and Mr. Alfredo Vargas of Lechuza Caracas and Director of Polo Challenge RD, welcome attendees and explain that the high handicap season will take place in the Dominican Republic from January to March of 2017.

Additionally, the Polo Challenge RD signed an agreement of collaboration with Santa Maria Polo Club, where the 45th International Tournament of INDI Polo is being played, in order  to promote polo through the union of events in Europe and the Dominican Republic. Both parties will benefit through shared experiences and information in marketing and coverage, among others. Santa Maria Polo Club Sotogrande is one of the most important polo clubs in Europe, conducting more than twenty-five tournaments throughout the year. In a press release disclosing their partnership, Alfredo Vargas said, “Definitively, with the realization of the Polo Challenge in the Dominican Republic expansion of this sport will spread to new levels, placing the Dominican Republic on the map in the world of polo.”

Follow the Santa Maria Polo Club to stay up to date with your favorite polo players and tide you over until the Polo Challenge RD resumes in the coming year. See Lechuza Caracas make their debut in the Casa de Campo Silver Cup in this video on Pololine TV: