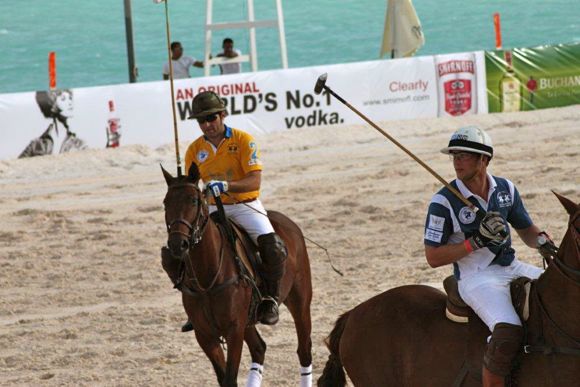 We recently held a International Beach Polo World Cup on the Beach in Cap Cana, where Casa de Campo sent 50 horses for the visiting players.  Some of the players came to visit Casa de Campo for a day and all vowed to come back as they were enchanted by our wonderland we call home.

The winning team consisted of Bobby Jimenez (Team Captain), Alfredo Vargas and a visiting Pro from the United States.  Both Bobby and Alfredo are Casa de Campo villa owners and active members of the Casa de Campo Polo Club.

They all represented Casa de Campo very well and one of our own Central Romana horses was elected Best Playing Pony of the tournament.

Thank you to Calixto for the article and thank you to Herbert Schoderböck for the photos.

In yellow are Luis Paniagua on right and his pro Todd Offen on left.