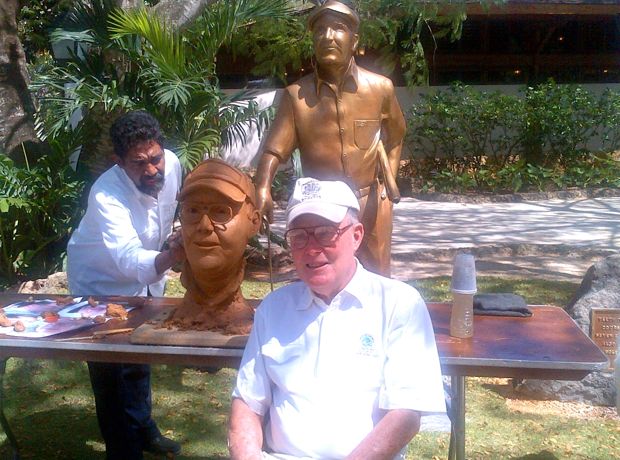 Pete Dye, one of the world’s most successful and influential golf course designers, who also happens to be the designer of all of Casa de Campo’s world famous courses; the Teeth of the Dog, Links, Dye Fore and the La Romana Country Club, now has a statue in his honor – at the entrance to the Teeth of the Dog.

Was anyone else wondering why the Pete Dye statue didn’t look much like Pete Dye!? Well it turns out that the head pictured is the “old” one… apparently since we took these photos on Tuesday a new head was created by El Artistico himself with Pete Dye sitting for him! And as you can see from these photos this head actually does look uncannily like Pete Dye!

The official statue of Pete Dye with the “new” head was officially unveiled on Saturday afternoon in a ceremony with Alfy Fanjul – more photos coming soon!

The moment the new statue was unveiled

In the statue Pete Dye stands tall and proud, with a golf club in his right hand and a map of the Teeth of the Dog rolled up under the other arm. Next to the statue the plaque reads “Teeth of the Dog is the only course in the world with 7 Caribbean edged holes, also known as the ‘seven holes created by God’, Pete Dye”.

The statue was created here in La Romana, by local artisan “El Artistico”, whose impressive statues, doorways, gates and fixtures can be seen all over Casa de Campo and Altos de Chavón. We believe that the statue will be officially “unveiled” during a ceremony with Pete Dye, although a date has not yet been confirmed.

What a wonderful way to recognise Pete Dye, one of the men who, without a doubt, made the Casa de Campo resort the great success it is today! In the late 1960’s, Pete Dye was invited to the Dominican Republic by Alvaro Carta, at that time running the South Puerto Rico Sugar Company (today the Central Romana Corporation), backed by Gulf + Western. Carta’s idea was to build a golf course to help cultivate the tourism industry in the Dominican Republic, a dream which thanks to the hard work and dedication of Pete Dye came true in 1971 when the Teeth of the Dog was officially inaugurated.

When the Teeth of the Dog was built in 1971, the area around Casa de Campo was mostly rural – and the course was called “Cajuiles I” after the many Cashew (Cajuiles) trees growing in the area. However, a lack of machinery meant that a crew of 300 labourers used hand tools and sheer force of will to carve the course out of the rugged Dominican coral rock and during construction the crew referred to the unforgiving parcel of land as “Dientes del Perro”, or “Teeth of the Dog.” Pete Dye liked the name and it stuck.

“Without the proper heavy machinery to crack the coral, we used sledgehammers, pickaxes and chisels. Whatever delicate features Teeth of the Dog possesses are a direct result of the hard work of those Dominicans who took such pride in their work.”

Despite having designed and co-designed more than 100 courses across the world, Pete Dye still cites Casa de Campo’s the Teeth of the Dog as one of the best accomplishments in his 50-year career!

Following the opening of the Teeth of the Dog in 1971, Pete Dye also designed Casa de Campo’s inland Links golf course, which opened in 1976 and which underwent a complete renovation throughout 2011 and 2012. More than 25 years later, the Dye Fore was opened in 2003, another great Pete Dye masterpiece which snakes along the cliff of the Chavón river – and which following the opening of an additional 9 holes called “The Dye Fore Lakes” is an impressive 27 hole complex.