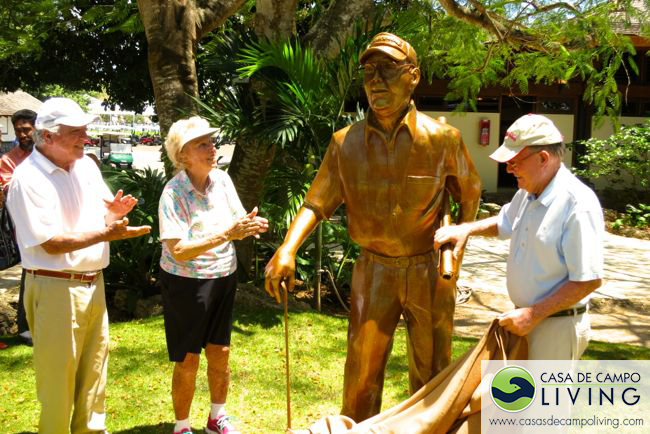 Last Saturday the 6th of April 2013, in the midst of the 28th annual Sugar Golf Tournament, VIP members of the Casa de Campo community gathered to watch the unveiling of the Pete Dye statue – which now stands outside the Teeth of the Dog Pro-Shop.

Pete Dye, one of the world’s most successful and influential golf course designers alongside his wife, Alice and Alfy Fanjul,President and CEO of the Central Romana Corporation, unveiled the 7ft statue, as Pete commented “I’ve grown a bit!” In the statue Pete Dye stands tall and proud – sporting his trademark hat and glasses, with a golf club in his right hand and a map of the Teeth of the Dog rolled up under the other arm. Next to the statue the plaque reads “Teeth of the Dog is the only course in the world with 7 Caribbean edged holes, also known as the ‘seven holes created by God’, Pete Dye”.

Once unveiled, Alfy Fanjul stepped forward with a replica bust which was presented to Pete on behalf on the Central Romana Corporation and Casa de Campo in recognition and thanks for his contribution to the resort. “You are part of Casa de Campo”, said Alfy Fanjul.

Following the ceremony, Pete Dye teed off on the Teeth of the Dog alongside Alfy Fanjul, Alvaro Silva and Carlos Morales for the second tournament round of the Sugar Golf Tournament (click here to read more).

The statue was created by local artisan “El Artistico” José Ignacio Morales, who with 38 years experience has impressive statues, doorways, gates and fixtures all over Casa de Campo and Altos de Chavón – in fact José Ignacio Morales began his artistic career in Casa de Campo with the decoration of 5 villas including the Fanjul’s Casa de Campo estate, Casa Grande and the villa formerly owned by Oscar de la Renta. Creating the statue took a total of 15 days, including the creation of a new bust – the original (click here for photos), modelled on an old photo, was replaced  following a sitting during which “El Artistico” José Ignacio Morales modelled by hand the new bust – complete with glasses and flat cap.

Despite having designed and co-designed more than 100 courses across the world, Pete Dye still cites Casa de Campo’s the Teeth of the Dog as one of the best accomplishments in his 50-year career! Following the opening of the Teeth of the Dog in 1971, Pete Dye also designed Casa de Campo’s inland Links golf course, which opened in 1976 and which underwent a complete renovation throughout 2011 and 2012. More than 25 years later, the Dye Fore was opened in 2003, another great Pete Dye masterpiece which snakes along the cliff of the Chavón river – and which following the opening of an additional 9 holes called “The Dye Fore Lakes” is an impressive 27 hole complex.

Having designed Casa de Campo’s most famous courses, Pete Dye, who is now 87 years old, actually lived in the Dominican Republic for 46 years – and during his time living in Casa de Campo lived in a magnificent villa in the Costa Verde neighbourhood overlooking the Caribbean sea, as well as holes #6 and #7 of the Teeth of the Dog.

Congratulations to Pete and Alice Dye!