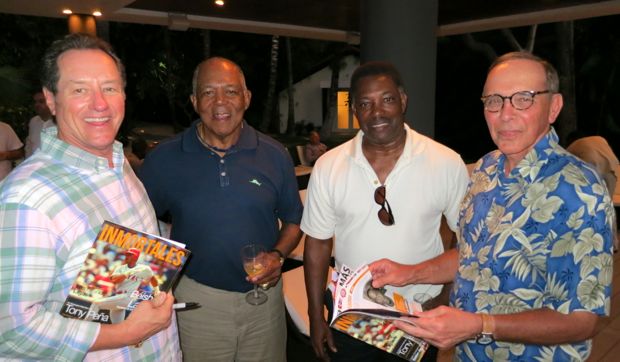 The luminaries as well as their family and friends and numerous other baseball stars, take part in a series of events and activities surrounding the celebration – in Casa de Campo and in La Romana.

Here we bring you an overview of the entire celebration.

Following the welcome cocktail a dinner was hosted on Minitas Beach – in honor of Roberto Clemente, winner of 12 Golden Glove Awards, the first Latino to reach 3,000 hits and a great humanitarian, who tragically died on route to Nicaragua to bring aid supplies following an earthquake in 1972.

On Friday afternoon the 8th of February, the luminaries of both the class of 2012 and 2013 were paraded into La Romana on a procession of open vehicles – allowing them to wave to their fans along the way. The first stop in La Romana was the site of the future Latino Baseball Hall of Fame Museum and Latino Baseball Town, following which the Latin Legends attended the immortalization ceremony, where the luminaries of the class of 2012; Bernie Williams, Tony Peña, Tony Oliva, Bengamín Oglivie, Luis Trite Arroyo and Manny Trillo, amongst others, unveiled their statues crafted by El Artistico; Jose Ignacio Morales.

Every year Honorary Chairman and co-founder of the Latino Baseball Hall of Fame, Alfy fanjul hosts a dinner at his Casa de Campo retreat, Casa Grande, an elegant occasion, which was this year hosted by Pepe Fanjul Jr. with his wife Lourdes. This gathering was not only attended by the Baseball Hall of Fame Class of 2012 and 2013, as well as the various members of the committee and Casa de Campo special guests, but also by Jenny Steinbrenner, daughter of the late George Steinbrenner, owner of the New York Yankees for 37 years.

Played on the Teeth of the Dog, the INMORTALES golf tournament was a great opportunity for the Casa de Campo golfing community to golf alongside their baseball heros – with every foursome including at least one former baseball player. Following the tournament the players enjoyed a prize-giving ceremony and lunch.

The show at the Altos de Chavón amphitheater began at 8pm on Saturday the 9th of February and was an endless celebration of the achievements of some of the greatest Latino Baseball Players of all time. In addition to the class of 2013, Miguel Cabrera, Roberto Weill, Jackie Robinson, Jeff Idelson, Roberto Clemente, Epy Guerrero, Horacio Martínez and many more were honoured with awards and recognitions.

Following the Grand Induction Ceremony, the gathered luminaries and baseball players, as well as special Casa de Campo guests, were invited to Roberto Weill’s Casa de Campo villa for a celebratory dinner – the last event in the schedule of activities surrounding the 4th Inductions into the Latino Baseball Hall of Fame.

INMORTALES, the official magazine of the Latino Baseball Hall of Fame, created by Silgon Inc., Marketing, Web Development & Publishing Services was received with much enthusiasm – by both the luminaries themselves, as well as the members of the committee of the Latino Baseball Hall of Fame and of course by the many baseball fans – who spent the evening getting their copy signed by all of the many stars!

“A true Home Run. Congrats to you and Silgon Staff. Rebecca [Hughes, editor of INMORTALES] will be immortalized!”

— Roberto Weill, founder and president of the Latino Baseball Hall of Fame.