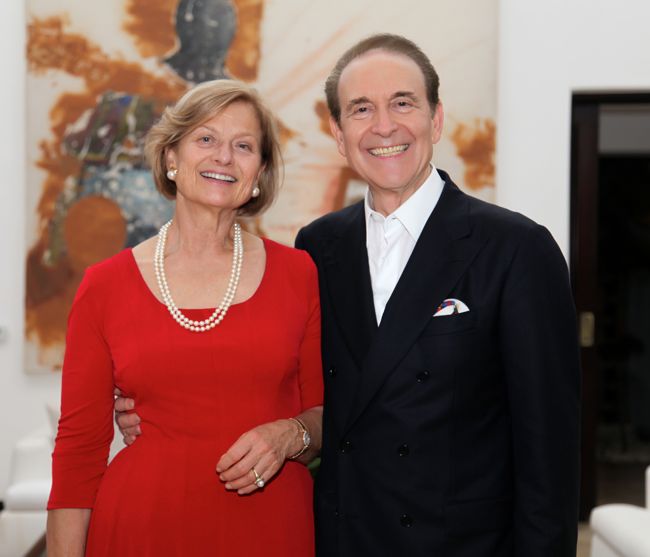 Joined by his wife Roswitha, as well as son Philip, CEO and founder of SILGON, and (soon-to-be) daughter in-law Rebecca Hughes, editor at SILGON, Claudio welcomed his many guests with his customary smile and effortless hospitality.

An annual tradition, the Silvestri holiday party welcomes guests from all over the world who have chosen to celebrate this special time of the year at our wonderful Casa de Campo resort.

By welcoming these special guests into his home, Dr. Silvestri is not only thanking them for their patronage, but also introducing them to our Casa de Campo resort community, allowing them to glimpse beyond the hotel and into life in Casa de Campo… perhaps enticing them to one day make Casa de Campo their home too!

Familiar faces of the community included Emilia and Pepe Fanjul, Sergio and Corinne Gobi, Alfonso and Annie Paniagua, Mery and J.J Arteaga, Eduardo and Jeanette Martinez-Lima, Rolando and Monica Gonzalez-Bunster, and many more, as well as Marco Maccioni, whose restaurant the Beach Club by Le Cirque was in charge of the delicious dinner.

Among all the special guests was Dominican Minister of Culture, José Antonio Rodriguez, joined the party as an honored guest, and presented the entertainment at the end of the evening; a mesmerizing performance by ENDANZA the National School of Dance, performed around the Silvestri’s pool.

The following collection of photos were taken at the holiday dinner Silvestri party at Costa Verde #5, Casa de Campo: