Fight for freedom! A short history of the Dominican Republic 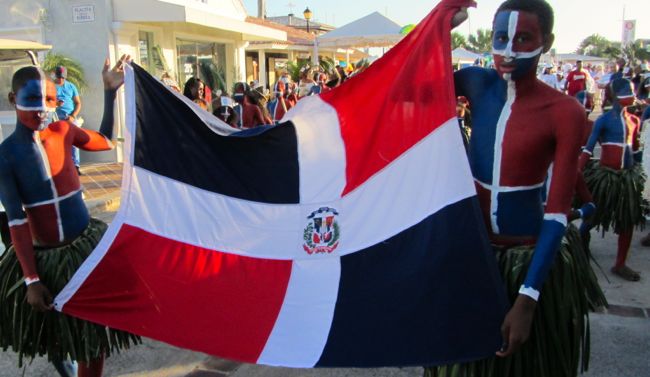 After Christopher Columbus arrived in 1492, a point when many cultures clashed during the Spanish colonization of “La Hispañola” island, as he called it, the Dominican Republic then became a battle zone where French, Spanish and Haitian troops fought for our land.

Soon after,  Spain suddenly became uninterested and left the Dominican Republic – after gold was found in México and other areas in America, but the land was soon invaded by French troops and affected by the Haitian Revolution; events which revolutionized the course of our history.  After the reconciliation between slaves and French men, the Spanish troops were defeated by forces led by General Toussaint Louverture, and it was in 1795 when France took over the island, with the abolition of slavery proclaimed by Louverture in Santo Domingo.

When the French forces returned to France after several years, the Haitians then invaded the towns of Santiago and Moca causing not only many deaths, but quite a dislike from residents from the Eastern part of the island, since they were forced to give up their language, culture and beliefs, adapt and become French speaking country.

Of course, the situation wouldn’t last for ever… in 1838 a man named Juan Pablo Duarte who was born in Santo Domingo and founded a secret society named “La Trinitaria” and along with his good friends Matías Ramón Mella and Francisco del Rosario Sánchez, secretly planned on putting an end to Haitian repression. How?

In 1843 they joined a Haitian movement to defeat Boyer (the French leader), after which they were exiled and imprisoned in Puerto Príncipe by the new Haitian President, Charles Riviere-Hérard, since he feared their revolutionary ideas of independence. However after an attack produced by Haitians, Charles definitely needed the help of “La Trinitaria” and they were then released.

Meanwhile, Buenaventura Báez, who was a wood exporter and also Deputy at the Haitian’s National Assembly, was negociating with France a way of establishing French forces in order to protect the Haitian Government from rebels – and since Duarte, Mella and Sánchez knew about this event, on the 27th of February 1844 they immediately declared their Independence from Haiti! You may ask how?…

The canon shot by Matías Ramón Mella on the night of the 27th of February 1844 at the “Puerta del Conde” (now famous for this event) was the official declaration of the Dominican war of Independence, which was supported by Pedro Santana (who became the Dominican Republic’s first President) along with hundreds of his workers and residents from Santo Domingo. To cries of “Dios, Patria y Libertad” (God, Homeland and Freedom), the Dominican flag was raised for the first time at the “Puerta del Conde” and the Haitian forces were confronted – causing the, to retreat and meaning that the Dominicans were finally free!!

Although Haiti tried to invade on several other ocassions, the Dominican Republic maintained its Independence for 17 more years, thanks to Pedro Santana’s bright idea of handing the power back to Spain – but that’s a different story! We will be publishing more details about it soon!

Born to José Duarte Rodríguez and Manuela Diez Jiménez on the 26th of January 1813, in Santo Domingo’s  Colonial Zone, Juan Pablo Duarte is known as the Dominican Republic’s Founding Father – as he was the founder of the secret society “La Trinitaria.” “La Trinitaria” was a group of Dominican nationalists, who successfully liberated the Dominican people from the Haitian repression in the War of Independence in 1844. Every year, the birthday of Juan Pablo Duarte is celebrated with a special mass at the Santa Bárbara Church in the Colonial Zone in Santo Domingo, where he was baptized. Many Dominicans also visit the Casa Duarte (Duarte’s House) in Santo Domingo, the place where he was born and raised, which has been a museum since 1967.

Born on the 25th of February 1810, in Santo Domingo, Matías Ramón Mella was a politic who had previously received military trainings -known for being the person incharge of setting out the different strategies for battle in the secret society “La Trinitaria” and best remembered for being the one who shot the “trabucazo” on the night of the 27th of February 1844 – the official declaration of war to obtain Independence from Haitian forces.

Born on the 9th of March 1817 in Santo Domingo and is remembered for being as well, one of the Founding Fathers of the Dominican Republic. He was the one in charge of representing Duarte once he had left the country in 1843, after fearing he would be imprisoned before the event. While Mella shot the “trabucazo” at the “Puerta del Conde”, Sánchez came along shouting “Dios, Patria y Libertad” (God, Homeland and Freedom) and was the person who actually raised the Dominican flag for the first time – moment in which the Dominican Republic was founded!