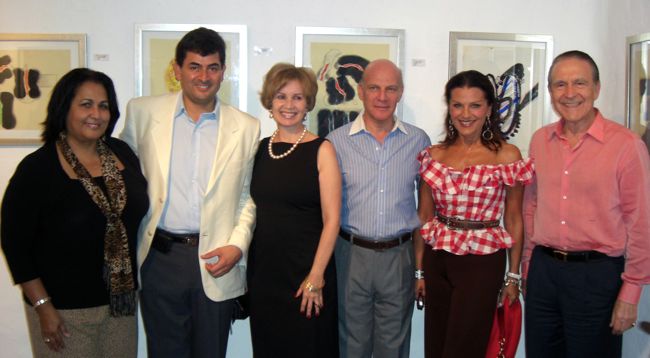 Last Thursday the 2nd of February, “Hernandez en Chavón” a new art exhibit presented by Columbian artist, Manuel Hernandez, was opened in the Altos de Chavón art gallery, a magnificent celebration of 50 years of art which the Hernandez family shared with the Casa de Campo and Altos de Chavón communities, as well as with friends and family.

Although the artist, Manuel Hernandez was not present at the opening, his proud son, Daniel Hernandez, who is also the manager of the Casa de Campo hotel played host to the event which attracted a large crowd of art lovers, who delighted in Daniel’s passionate descriptions and interpretations of his father’s paintings.

This is the 2nd exhibit, the Maestro Hernandez has opened in the Dominican Republic in the past month – on Wednesday the 18th of January, another exhibit “50 años de signos” was also inaugurated in Santo Domingo at the Galería Nacional de Bellas Artes (National Gallery of fine arts). Although 2 distinct exhibits, they are unsurprisingly very similar, both characterized Hernandez’s unique style and affinity to “symbols” or rather “signos” in a variety of different designs or colors, with many featuring the distinctive “M” shape.

Painting by Manuel Hernandez on display in Altos de Chavón

The exhibit in Altos de Chavón, “Hernadez en Chavón” consists mainly of smaller paintings and prints, which could be grouped together to form a remarkable collection, but also includes some much larger canvases similar to those exhibited in Santo Domingo.

Those who attended the inauguration event enjoyed a pleasant artistic evening accompanied by wines and cheeses. The following photos were taken during the opening:

An interview with Daniel Hernandez and an insight into the artist world of the Maestro Hernandez; inspiration, development and interpretations – coming soon!