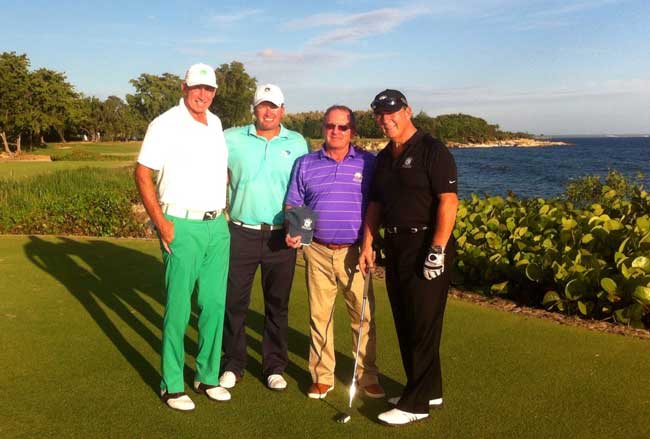 Having arrived in Casa de Campo 33 years ago, when the resort was just on it’s way up, he has worked tirelessly to make golf at Casa de Campo the world-class experience it is today. Most recently named as the “Best Golf Resort” by Travel Weekly, the “World’s Leading Golf Resort” by the Global Travel Awards, as well as ranked among the world’s top 25 golf resorts by LINKS magazine, there is no doubt that Gilles and his team have done a terrific job.

So when it came to celebrations, for Gilles, the only way to celebrate was with a golf tournament on the Teeth of the Dog – his favorite course. “I have played it thousands of times and can’t wait to play it again. It is like being married to the same person and you cannot wait to get home at night to be with her or him. This does not happen very often, it is pretty special,” Gilles told Casa de Campo Living.

Always faithful to Teeth of the Dog – even on his birthday cake!

Fortunately for Gilles, luck (or skill) were on his side and his team (Calixto, Peter and Eric) came out the winners… and went on to celebrate their victory later that same night at Gilles’ birthday party!

“I am always amazed of how many wonderful people I have met during my 33 years at Casa de Campo and how we stayed in touch. Most of those people when they come to Casa de Campo feel like they are coming to visit family.

Merrilee worked very hard to make the day very special and she did. I also enjoyed ‘facetime’ with my daughters Jennifer and Dominique while the 4 grandsons sang Happy Birthday – that was the icing on the cake.

Many members of the Casa de Campo community; long-time Casa de Campo villa owners and residents came together to celebrate Gilles’ 65th birthday that same evening at his birthday party. With plenty of drinks, best wishes and laughter, Gilles had a blast celebrating with friends. And as no birthday celebration is complete with a cake, Mery Ledesma presented the birthday boy with a picture of our golfing hero teeing off on the Teeth of the Dog!