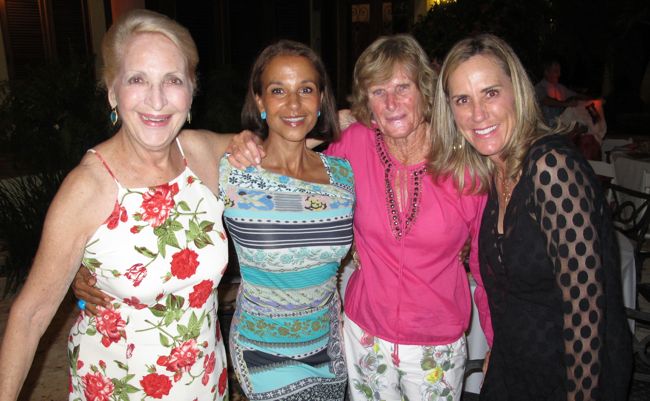 A formidable golf player, Helen’s celebrations began on the golf course – where Gilles Gagnon, who has been Casa de Campo’s Director of Golf for the last 31 years hosted a special tournament in her honor and even treated everyone to cake!

“We decided to do a little event for her to celebrate her birthday – and what is a birthday without a cake. We put a 90 candle on the cake and she told me to turn it over so it was 60!”

Later that same week, Helen and her friends gathered at the beautiful Casa de Campo villa of Ann and Lou Gilmore, for a birthday party and dinner in Helen’s honor. A real celebration; dinner and drinks were enjoyed under the stars and on the terrace beside the pool, followed by a toast, cake and more drinks. As part of the celebration, everyone got a special gift; a T-shirt with a photo of Helen as a child with the message “Helen, she claims she is 90”!

As a happy, active and very popular member of the Casa de Campo community, here we bring you some fun memories and messages from Helen’s many friends:

“The first time I met Helen Wynn she was hitting a 3 wood out of a fairway bunker….I asked” was that a 3 wood?” She responded “yes it was” The ball traveled about 150 yards landing on the green! I called her a “crazy old woman” and we’ve been friends ever since!

We celebrate Helen’s birthday every year as she is one of the most remarkable women I’ve ever known!   And yes she can still beat me with a 3wood out of the bunker!”

“Helen is one of the most amazing woman I know here or anywhere. At 90 years old she is like a 50 year old person or better.

Once, she was stopped by a police coming back for Santo Domingo for no reason, she stopped, told him she was not speeding and took off. He ran after her, but she lost him in La Romana and came back to Casa de Campo. This is no joke it is the truth. I think she was over 85 years old when it happened.

Incredibly, Helen shoots her age or better at least 50% of the time when she plays (golf). Most people will never shoot their age or maybe can do it once in a life time. Pete Dye is another one that does that all the time.”

“Mort and I have known Helen since the late 80″s early 90’s. Helen and her husband, John, are an example of residents whose previous experiences included various unusual and impressive professional work and living challenges both in the US, as well as abroad. She opens our life through her experiences.

My fondest memory of Helen is the sharing and the support she has given me in the reality of the long term care of my husband- based on her experience in caring for her own husband.”

“I have known Helen for 15 years. Helen is a strong willed woman. She is direct in everything she does. I think I would best describe Helen as a caring soul who cares about the well being of those around her. She has been a constant friend of mine for some years now and I treasure our friendship. She has helped me through some very tough times throughout the years and has always been by my side when I needed her most.

She plays a big part in our Casa de Campo community and participates in many causes to helping those in need. She has been instrumental in helping the Haitian community, after the earthquake by sending over clothes and medicine. She has helped build and furnish her maid’s home and also her maid’s sons home.

One of my fondest memories is talking with her at a dinner party some 6 years ago. She told me she has had a good long life and if she can manage another 3 or 4 years she would be content. I remember breaking down in tears at the thought of not having her around. She smiled at me in surprise of my reaction. Next day she sent me an e-mail saying that she had decided to give me another 5 years. Since then we have decided to renew her promise each year. Hee Hee. She makes me laugh also.”

“Since I am Helen’s “youngest” friend….unfortunately, not chronologically……I would be happy to share my first meeting.

I remember the first time I met her was playing golf….. she would stand there with one leg crossed in front of the other, leaning on a golf club, giving me “the hairy eyeball” (as my kids would say) waiting for me to hit the ball. I was sooo intimidated….I ended up hacking around the course. She never said anything….only the stance and the look! As I got to know her more, I learned what an incredible person, what fabulous stories she told of her upbringing, life and travels…… she is and a wonderful friend (who never hesitates to tell me like it is!)”

The following photos were taken during Helen’s birthday party at the Casa de Campo villa of Ann and Lou Gilmore: