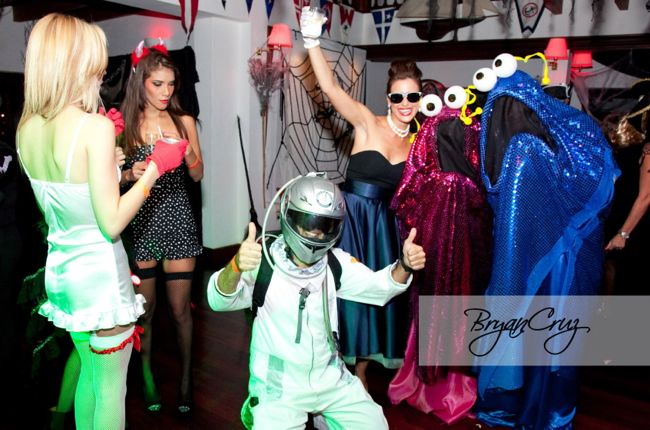 An annual tradition and one of the most popular parties in the Casa de Campo social calendar, this group of Casa de Campo friends; Patricia Proaño, Ivonna Sosa, Tato Caceres, Amelia Pereya and Gricelle Lahoz, set out every year to create the most gruesome and ghastly party possible  – and it just keeps getting better and better! Congratulations!

The following tale of the haunted Halloween horror party which woke the dead last Saturday the 27th of October was contributed by members of the hosting committee; Ivonna Sosa and Patricia Proaño (thank you very much for contributing).

Halloween at the Yacht Club – by Ivonna and Patty

By the time the ghastly and ghostly guests made their entrance, the terrifying transformation was complete – and they were greeted by a scary scene, completed with lights and smoke…which soon welcomed the living and the dead to join the celebration!

La Enoteca (Vinos S.A) from the Marina Casa de Campo sponsored the celebration with their renowned Glenmorangie whisky and Belvedere vodka, as well as Distribuidor Lahoz, who contributed the mixers and El Catador with their prosecco Maschio.

On the deadly decks was DJ Kanvas – from 10pm through to 5:30am! Without repeating any songs, DJ Kanvas kept the more than 100 gruesome guests grooving all night long!

Among the attendees were Elvis Presley, Audrey Hepburn in Breakfast at Tiffany’s, Felix Baumgartner (of Supersonic Space Jump fame), I Dream of Genie, the Bishop of Dom Ham, a voodoo priest, the Statue of Liberty, “los chulos”, can-can dancers, the Duchess of Alba, a flapper from the roaring 20’s, Rihanna, the Sheriff and the Cowboy, a leopardess, witches, the Egyptians, the Indians, an Arabic dancer, the martians, a fox and little red riding hood, the Venetians, the skeletons, Wonder Woman and Robin and a werewolf……among many others!

Zamira and Jorge Widman, who won a certificate for the Casa de Campo Spa

Ivonne and Humberto Sangiovani, who won a certificate for the Casa de Campo Spa.

Simone Rosati, who won a membership to La Enoteca’s “CLUBVINOS”

Patrick Lassis, who won a membership to La Enoteca’s “CLUBVINOS”

The most original: The native Indian

Jose Cedaño, who won a bottle of champagne from La Enoteca.

As has become the tradition, just after the stroke of midnight, a delicious Sancocho (traditional Dominican stew) was served with white rice and avocado – just the thing to re-ignite all the spooky guests and keep the party pumping!

Each year the party gets even better and more creative! Thank you all for coming and for the effort everyone put into their great costumes!

The following photos were taken during the Halloween Party at the Casa de Campo Yacht Club on Saturday the 27th of October 2012:

PHOTO CREDIT: All photos used in this post were contributed by party planners; Patricia Proaño and Amelia Pereya, as well as by professional photographer, Bryan de la Cruz