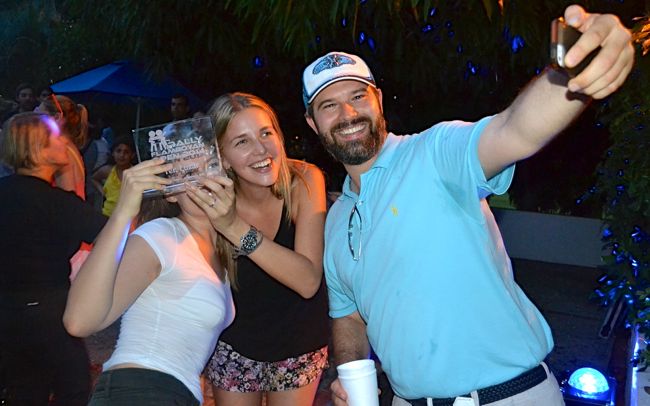 More than 39 teams, and 150 members of the Casa de Campo community took part in the rally which saw teams of 2-4 people racing around the Casa de Campo resort in golf carts taking selfies and gathering treasure!

Setting off from the pool of the Golf Villa IV neighborhood, each team had a maximum of 2.5 hours to solve the clues and return with proof that they had completed the rally. Proof included objects that had to be physically shown to the judges, such as the latest CasaLife magazine, as well as selfies taken in certain locations across the resort – some much easier to do than others!

At the end of the day, the teams reconvened at the starting place where the judges counted the scores, and the winners were announced to be team CasaLife Magazine. Captained by the one and only Philip Silvestri, the CasaLife Magazine team consisted of the gorgeous Viktorija Seijas of Boutique de Bordados and the equally beautiful Martina Avanzini of Martinaturally, and was sponsored by Eco Planeta Caribe who donated the super-speedy electric golf cart!

In second place was Los Pro, led by Leo Proaño, who in addition to clearly knowing Casa de Campo like the back of his hand, is also an up and coming film producer, whose recent works include Cristo Rey and La Extraña. On Leo’s team was his niece Valeria Alonzo and her friends, Daniela Hernández and Fabiana Villani.

And what about me? Well good question, Philip and I and our group of friends decided to mix it up a bit – instead of couples going together we split up and drew names out of a hat for the teams. My team, the Casa de Campo Living team was me, Arturo Quezada and Pilar Camarero, who despite also having a super speedy golf cart sponsored by Eco Planeta and also being uber competitive and over-excited… we came in 6th. Boo hoo!

And best of all? RD$13,600.00 was raised and donated to the Fundación Río Salao, whose aim is to beautify the Río Salao area in La Romana by painting the facades of the houses in vibrant Caribbean colors and later to create a “tourist alley” with small businesses selling souvenirs and crafts.

Finally we must say a big THANK YOU to Carmen Santoni for organizing the activity and to her team of volunteers; Florence Rousseau, Tina Fader and Julio Vilorio for making it possible.

Seriously thank you Carmen, it really was so much fun!

The following collection of photos were taken before, after and during the great Casa de Campo Selfie Rally. Thank you to everyone for sending us their selfies!!!