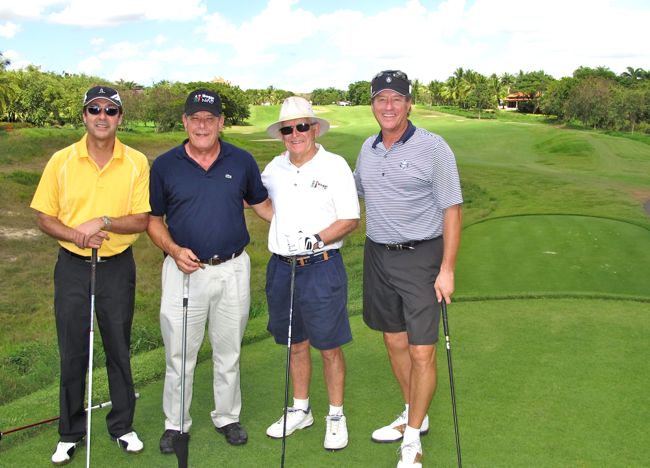 With so many Casa de Campo golfers (200 to be exact) taking part in the Hogar del Niño golf tournament on Saturday the 18th of February, the “salidas” had to be divided into 2 groups, with the first group teeing off at 8:30am and the second group heading out after the rather thrilling ball drop at 1:30pm.

Both groups of players, whether they played in the morning or the afternoon enjoyed a fun round of Casa de Campo golf in the glorious sunshine played in a ‘scrabble’ format – so that each group worked together to get the best possible score!

The children of the Hogar del Niño sing the national anthem

For those who played in the afternoon, their game was inaugurated by an adorable performance of the Dominican national anthem – presented by a group of children from the Hogar del Niño, which was followed by the helicopter ball drop……

Members of the Casa de Campo community – golfers as well as the non-golfers purchased numbered golf balls which were then dropped, tossed and thrown via helicopter by Casa de Campo golf director Gilles Gagnon down towards a hole in the La Romana Country Club driving range. The winners were the lucky people whose ball landed inside the hole!

The results of the Hogar del Niño golf tournament played on the La Romana Country Club golf course in Casa de Campo were:

Congratulations to Peggy Richling (pictured above in the cute pink shorts) – who got a “hole in one” during the morning round of the Hogar del Niño tournament on hole #3 of the La Romana Country Club! How exciting! And even more exciting is that Peggy was awarded a prize for her hole in one – a airline ticket to Columbia donated by golf magazine,”Golfistas Dominicanos.”

The following photos were taken during the morning and afternoon rounds of the Hogar del Niño golf tournament, played at the La Romana Country Club in Casa de Campo:

Click here for an overview of the Hogar del Niño weekend event!