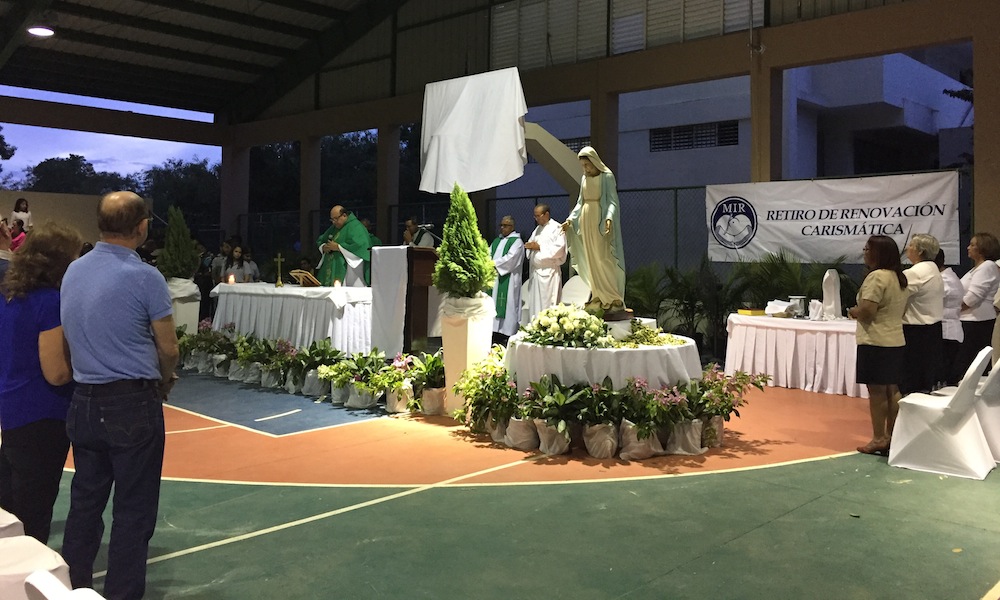 Last weekend, September 30th-October 2nd, the 26th Fundación MIR “Retiro Carismático” or “Spiritual Retreat” successfully took place. The 3 day annual event has been has been celebrated in Casa de Campo every year since 1990, organized by Lian Fanjul de Azqueta and Lyanne Azqueta, President and Founder and Executive Director of the Fundación MIR, respectively.

This year’s theme was “Caminando de la mano misericordiosa de Dios” – Walking alongside our merciful God. Throughout the weekend, several conferences were held at the Flamboyan Conference Center at Casa de Campo given by Archbishop Ramon E. Albino of the Diocese of Mayaguez, Puerto Rico, Father Felipe Pérez, and by Father Edgardo Acosta that were attended by over 600 participants.

On Saturday, Father Edgardo Acosta offered a conference for youth where more than 300 from La Romana received spiritual guidance. As is now tradition, while the majority of the retreat took place in Casa de Campo, a special mass to pray for the sick took place over the afternoon: “Misa por los Enfermos” was held on the court of Politécnico Fundación MIR. With more than 500 people present, Archbishop Ramon E. Albino along with Father Felipe Perez, Sister Carol Razza from the Warriors of Worship Ministry, Mr. Miguel Calzado, and Father Edgardo Acosta prayed for the sick.

The retreat ended on Sunday the 2nd of October in the afternoon with a closing Mass presided by Archbishop Ramon E. Albino. Mrs. Lian Fanjul de Azqueta was unable to assist this year due to the weather but sent a speech that was read by one of the Sisters of the Fundación MIR Schools where she thanked all those who participated and celebrated 26 years of this beautiful tradition.

We hope to see you all again in next year’s meeting; it is definitely a retreat to experience in person, feeling the support from the community and blessed energy of renewed faith.