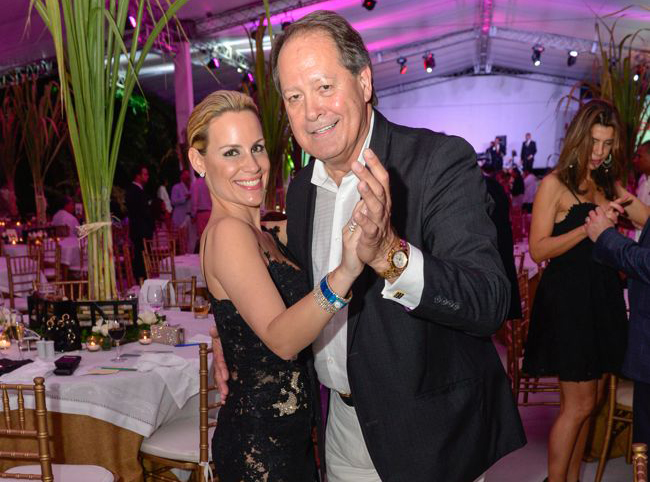 On Saturday January 17th, the Fundación MIR celebrated it’s 25th annual Magical Splendor for Life Gala and Fashion Show, the best one so far. Celebrated at Casa Grande, with a cocktail hour with Chivas Regal and Ron Atlantico, fashion show by Badgley Mischka’s and their Spring Summer RTW 2015 collection, music and dancing with our favourite Miami based DJ, DJ Gringo and a live band.

Guests started to arrive to Casa Grande at 8pm and were greeted with a chorus of “Buenas Noches” by the smiling faces of the children of the Fundación MIR, then met by the paparazzi taking photos of everyone, while enjoying the cocktail hour with Chivas Regal and Ron Atlantico, also having the option of enjoying hand rolled cigars from the Tabacalera García.

While mingling everyone could see the fundraising show stopper, Saks Fifth Avenue featuring Roberto Coin jewellery’s exhibition, which included a display wall with the 50 “Mystery Boxes”, which with gifts such as a Channel purse, Gucci sunglasses and Roberto Coin jewellery left all the lucky owners more than pleased. By the time the evening started only 17 “Mystery Boxes” were left… and those sold out very fast!

The evening was officially started by Pamela Sued’s “Thank you” to the guests for their collaboration to the cause year after year, and to the Fundación MIR for their hard and selfless work. Pamela also caught the public’s attention as she showcased the Bremont & Chivas “Chivalry” watch, one of 12 unique timepieces donated by Chivas to the Fundación MIR, which we got to know at a cocktail party hosted earlier that same week (click here for photos), and which was auctioned in a silent auction during the gala.

After the cocktail hour the guest were invited to a delicious dinner, being seated at tables surrounding the runway/platform were the golf tournament winners were announced, and we also heard a few words from a proud Fundación MIR graduate. “For me it is a great honor to be part of the Fundación MIR family. To hear the name of Fundación MIR for me is no more or less than a synonym of well-rounded education, since Fundación MIR is an institution that works day after day to educate boys and girls of  limited resources toward the right level of education…” she said.

The fashion show began and our jaws dropped, the runway was like a sugar cane and spring flowers garden. The embroidered gowns in featherlight organza and gazar that represented the duo’s vision, inspired by “60s French science fiction films”, were reminiscent of a dreamier Hollywood golden age. We had the luck to witness Badgley Mischka’s Spring Summer RTW 2015 collection and some of their Resort 2015 looks as well, the night was full of great surprises.

After the Fashion Show it was time to show our moves, music and dancing with a live band, and later Dj Gringo, a magical night indeed, a celebration of the many years of giving to all the children in Fundación MIR. This year’s Magical Splendor Gala hosted by Alfy and Raysa Fanjul was the best!

Congratulations Fundación MIR for outdoing themselves each year!

The following image collection were taken during the Fundación MIR Magical Splendor Gala by Alejandro Heredia: