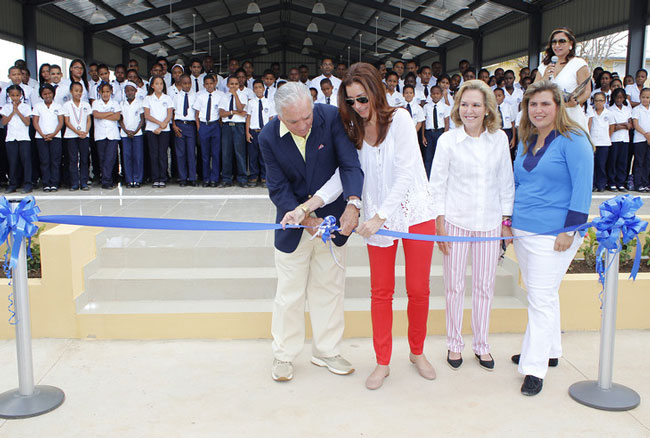 On Tuesday April 15th, the Fundación MIR was very happy to celebrate the inauguration of a new facility for it’s more than 1200 children, the “Salón Multiusos” located at the Campo Nueva Esperanza.

With more than 1200 students from pre-kinder to 4th grade, the Fundación MIR is one of the largest education centers in the area, and their facilities just got even better, with the opening of the new “Salón Multiusos”. This “Salón Multiusos”, which in English means “multi-use pavilion”, is exactly as the name suggests – a place the Fundación MIR school will use for many different activities and events for their students.

Guests of honor at the ceremony were Raysa and Alfy Fanjul, whose hard work and dedication to the Fundación MIR in hosting the annual Magical Splendor for Life fundraisers contributed greatly to the construction of the new facility. As such, Alfy Fanjul led the ribbon cutting ceremony alongside his wife Raysa, vice president of the Fundación MIR, his sister Lian Fanjul de Azqueta, president and founder of the cause and his niece, Lyanne Azqueta, executive director.

Immediately following the ceremony Alfy Fanjul took a moment to say a few words, and while expressing his happiness to have helped the cause provide a new facility for the children, he also turned to address the children and thanked them for coming into school on their vacation.

The “Salón Multiusos” will be used for all kinds of different events and activities, from book and science fairs to assemblies and even dances, as well as their graduation ceremonies. “Now the children will be able to graduate right here in their own school”, said Lyanne Azqueta with pride.

Following the ceremony, the special guests took a tour around the Campo Nuevo Esperanza campus, home to the boy’s vocational school, as well as the Primaría MIR, the pre-school. The Fundación MIR was proud and excited to announce that next year a total of more than 1400 children will be enrolled into the Fundación MIR schools, something which is possible thanks to the construction of new facilities such as the “Salón Multiusos”, as well as new classrooms.

The following collection of photos were taken at the Fundación MIR Campo Nuevo Esperanza in La Romana during the inauguration ceremony of the new “Sálon Multiusos”: