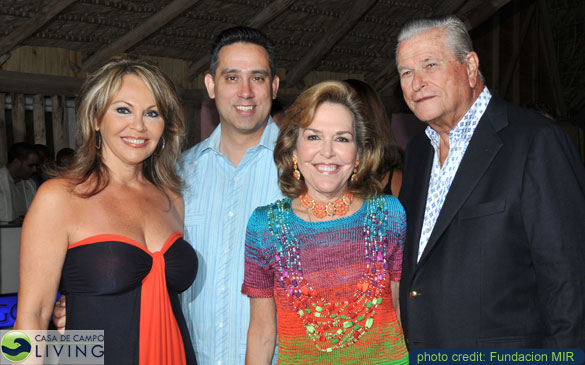 This last Saturday, the 8th of August, Casa de Campo was host to the annual ‘Family Weekend for Life”, which saw many of Casa de Campo’s affluent, charitable and beautifully dressed come show their support and participate in an event designed to help an international charity organization dedicated to supplying the Dominican Republic’s most marginalized people with a variety of life-altering services. As always, the event was chic, sophisticated and fun, mixing top executives and family of Santo Domingo’s elite with, villa owners from around the world, the occasional resort guest and a few generous first timers whom are always willing to help a good cause and enjoy a good fiesta and successfully raise record amount, proving that the people of Casa de Campo have stepped up to the plate during these tough times.

“We are so thankful for all of the people who collaborate with us to make this event possible and for the people who attend, Fundacion MIR would not exist without all of you – God Bless you”
– Lian Fanjul de Azqueta.

Preceded earlier in the day by Golf and Tennis Tournaments at the private La Romana Country Club, the event was also an opportunity to bestow the necessary awards on who took on the challenge of competing in the Golf and Tennis tournaments, totaling just over 100 competitors (80 in the Golf and 25 in the Tennis)! The respective winners where as follows:

We caught up with Daniel Dalet, who played in the golf tournament, winning the Gross Champ by playing 71 strokes gross, and asked him to share with us a little about his experience:

It is a beautiful cause. It was especially heartwarming to see the different generations of children helped by the foundation. The ceremony was inspiring and it was clear that a lot of effort has gone into this program.

I consider it a greater incentive to play in a tournament that serves a greater cause and is as well organized as the MIR tournament. The course conditions were pristine and lady luck was on my side. My guests and I had a wonderful time at the festivities and look forward to it next year.

This will mark the 2nd time since the August MIR event evolved into two event, moving of the Fashion show till early in the year. Originally having only one major Fundraising event per year, support for MIR has continued to grow, as have the responsibilities they are now in charge off. The support shown by the Casa de Campo community of residents, villa owners and aficionados has always been vital in past years, and are even more so today! To learn a more about Fundación MIR, visit their website: http://www.mirinternational.org.

As a big supporter of Fundación MIR, Tiffany & Co. has consistently provided assistance in the execution these events, generously hosting an impressive “Wall of Blue Boxes” in which supporters can purchase a Mystery Blue Box from the wall. Each box potentially holds a prize of equal, lesser or substantially greater than the $300 purchase price, which also happens to be tax deductible. One such prize, with an interesting story, was easily worth over $4,000, which was won and gifted back by Anders Alm (owner of Ikea), under the generous condition that it be auctioned off, and the proceeds donated back to Fundación MIR, helped raise an additional $3,300 within just a few short minutes, by long time Casa de Campo resident Sally Crasso. It is also worth noting that the Mystery Blue Boxes did not spend much time on the wall, having almost all been purchased within the first hour or so. By 10pm, not a box was left!

After such a lovely event, its time to shake it a little on the dance floor! Starting with some traditional merngues, salsa and live vocals, the night progressively got younger while transitioning to the main dance floor of the palapa to the official After Party, which kept the beats going strong till well past 2am. With the After Party, pulling out all the stops, nightlife all around Casa de Campo seemed to blossom benefiting from the sexy and affluent ultra chic enjoying the various ambiances and establishments available. From Pepperoni to Papa Jacks, the night was fun and full of life and excitement!

As these events seem to happen flawlessly, it is easy to take for granted the small armies of people, volunteers and supporters that make these events possible. From their offices, recently moved to Altos de Chavon, the Fundación MIR team has spent a tremendous effort coordinating the event, working in conjunction with various departments of the Casa de Campo resort, such as the Food and Beverage / Catering Department, the Marina Casa de Campo, Central Romana and so many more. The effort required to put together any such event is simply incredible.

Do you have an interesting story to share about your experiences at the Fundacion MIR ‘Family Weekend for Life’ event, photos or video, we would love to hear from you! As our goal is to keep this page running with interesting news and content for the community, by the community, we need everyone’s keeping this site going. Writers, photographers and story tellers welcome, become part of our collaborators!