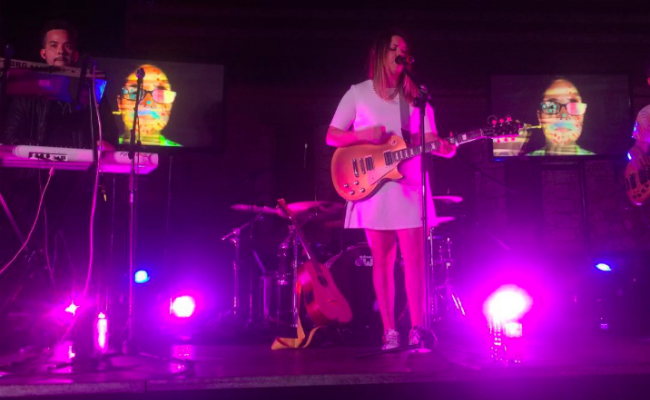 It’s no secret that I’m Casa de Campo Living’s music geek. While I had heard one or two of her songs, when we announced the Covi Quintana concert at Papa Jacks  I took interest in getting to know her songs and style just in time for singing along at the concert. By Saturday night, I was hooked on Covi’s pop beats which proved to be a hit for a full house at Papa Jacks.

The 21 year old, Dominican singer-songwriter has become quite famous in the local music scene positioning herself as an authentic and care-free artist who isn’t afraid to go against the tide. Her melodic voice and musical style are quite unique and refreshing – just what the young crowd at Altos de Chavón wanted to enjoy at Papa Jacks last Saturday.

Having announced the concert on Casa de Campo Living just a day ahead of time, we were excited to find a full house at Papa Jacks there early to support this up and coming artist. Papa Jacks set up a special stage for the concert in front of a table viewing area, which was just perfect to enjoy the beautiful evening outdoors with good music and drinks.

The concert was a huge success, proving once more that life on the Cobbles is more exciting every day. We hope that Papa Jacks and other Chavón establishments keep putting together these special events since our community is not one to hold back on enjoying some quality entertainment.

We leave you with a small video of the concert courtesy of Papa Jacks. Enjoy!