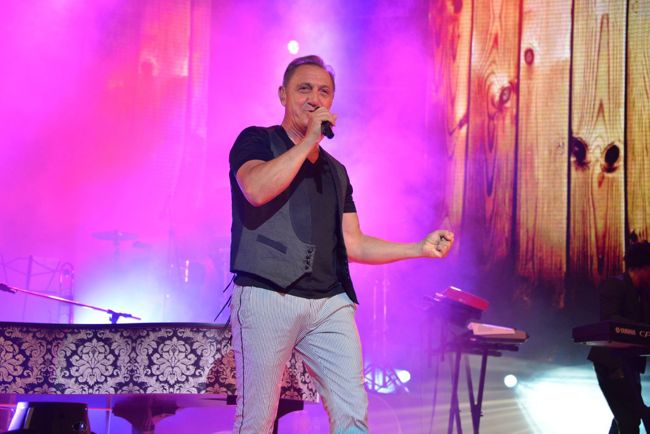 For numerous national and international visitors at Casa de Campo, our very own paradise, having the opportunity to enjoy, sing and dance to the rhythms of Franco de Vita’s music at his concert, celebrated last Saturday 19th of April 2014 in the Altos de Chavon amphitheater, was definitely a MUST during these past Easter Holidays in Casa. And despite the threat of bad weather, the famous venue was filled with more than 5,000 excited fans!

On this occasion, which marked Franco de Vita’s second appearance at the Altos de Chavon amphitheater, “Ya lo he vivido” (I have lived this before) was not only the title for one of Franco de Vita’s greatest hits, but it was (possibly) a phrase that popped into many minds of those who also had the opportunity to enjoy the artist’s first show in Altos de Chavon back in 2011. Given his outstanding musical career, it was not a surprise to find various generations – teenagers, parents and even grandparents – among the happy crowd.

The tour “Vuelve en primera fila”, brought by ACEGO group, was not only composed by an impactful scenario, lights and sound, but it also included 9 latin musicians, as well as various special guests such as well known artists Eddy Herrera, Wisin, Mexican singer Carlos Rivera, Andres Acosta Gusi, among others – all of them important elements that guaranteed the event’s success, laughter and dancing – a success that was lived to the fullest by Franco de Vita, and perceived in numerous occasions where the Altos de Chavon amphitheatre was -literally- filled by more than 5,000 voices who sang along to the artists’ greatest hits “Y tú de que vas”, “Solo importas tú”, “Te veo venir soledad”, “Si la ves”, among others.

This perception could possibly be confirmed by Coilan Odenny Santana Moreno, one of thousands of fans who was fascinated by the repertoire selected by the Venezuelan artist:

“Franco is my favourite artist, as a birthday gift, I wished to come and see him! It has been an exciting experience, and although it rained before the concert even started, nobody moved. We all waited patiently to see Franco de Vita! It was a success, he included a variety of songs that are present in his most recent album, as well as some of the most famous ones. I loved it and I enjoyed it to the fullest!”

A few minutes before midnight, when it seemed nothing could exceed the levels of “excellence” experienced and delivered by the famous artist, his fans let out a roar of excitement as Franco de Vita ended the concert with two of the most awaited songs “Buen Perdedor” (Good Loser) and “No Basta” (Not Enough). THE perfect end to an amazing night!

Congratulations to Franco de Vita! Concert “Vuelve en primera fila” will undoubtedly be listed among the most outstanding shows presented at the Altos de Chavón amphitheater:

Below we share a selection of photos taken during Franco de Vita’s concert, celebrated last Saturday 19th of April 2014: