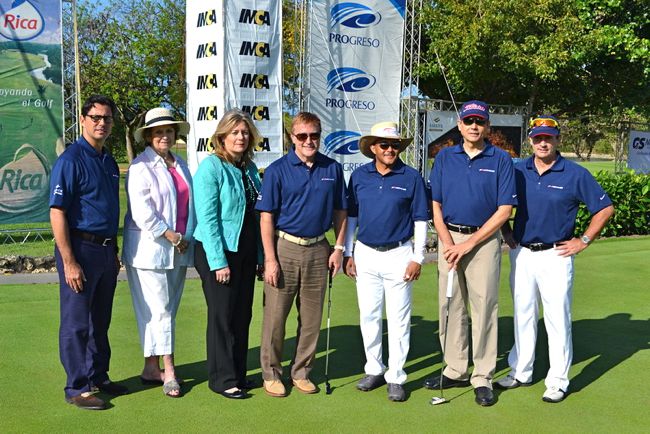 On Saturday the 29th of March, Francisco and Fabio Santoni became the winners of the 15th edition of the Charles T. Manatt Memorial Ambassador’s Cup, hosted by the American Chamber of Commerce in the Dominican Republic (AMCHAMDR).

The tournament, played on the Teeth of the Dog golf course at Casa de Campo, is an important fundraising activity for the AMCHAMDR, with funds raised to support their numerous social responsibility programs in the areas of community development and basic education.

Ambassador for the United States in the Dominican Republic, James Brewster, had the honor of symbolically teeing off the contest at 8am. Following which more than 120 locals and foreign players  headed out onto the Teeth of the Dog in Casa de Campo, and enjoyed an excellent morning of golf on the Caribbean’s #1 course!

Amongst the players taking part was Roberto Salcedo, District Mayor for the Santo Domingo National, who won the 1st place (net) of the tournament.

The AMCHAMDR golf tournament on the Teeth of the Dog

The special prize for the “Closest to the Pin” went to Osvaldo Santana, whose team also won the 1st place in the net category, division C, while Neit Nivar took home the other special award “Longest Drive”.

The winners and results of the 15th annual AMCHAMDR golf tournament are as follows:

The following collection of photos were taken during the Charles T. Manatt Memorial Ambassador’s Cup, hosted by the American Chamber of Commerce in the Dominican Republic (AMCHAMDR).

The American Chamber of Commerce of the Dominican Republic is a non-profit organization that seeks to strengthen the development of trade ties between both countries through the strengthening of free enterprise, investment promotion, community service, improving government relations and international and service to its members. Founded on November 8, 1923 it has a membership of more than 2,700 businesses and professional firms in Santo Domingo and nine provincial offices.