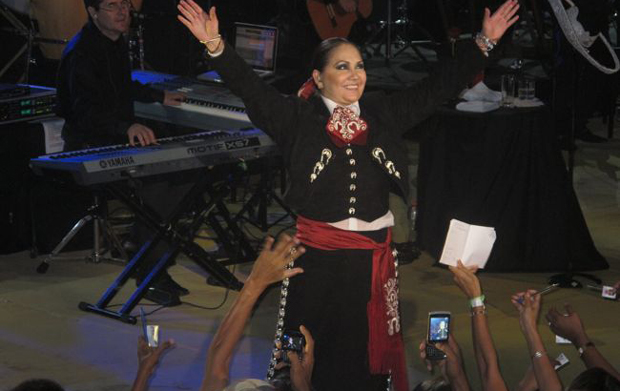 Rather a long time ago – in June 2012, famous Mexican singer Ana Gabriel, performed at the Altos de Chavón amphitheater in Casa de Campo – to film a Live CD-DVD, and now two of the songs recorded during her performance have been released on Youtube.

The Casa de Campo community, as well as Ana Gabriel fans from across the Dominican Republic were invited to take part in the concert on Saturday June 9th 2012, as “extras” for the filming – which lasted from 8pm to 1am! In that time the packed amphitheater enjoyed a magnificent performance by Ana Gabriel, which included no less than 15 Mariachi songs – one of which “Siete Veces, Siete Más” has literally just been released on Youtube (see below to watch the video), as well as “Pacto de Amor” which was released on Youtube on January 8th of this year (video below).

The concert ended with “El Cigarrillo”, Ana Gabriel’s most famous song – which sadly has not yet been released on video! We’re waiting Ana Gabriel… we’re waiting!!

“Mexico knew I wasn’t going to be Mexican, Mexico knew I would belong to you… my voice is yours, of all Latin America!”   — Ana Gabriel