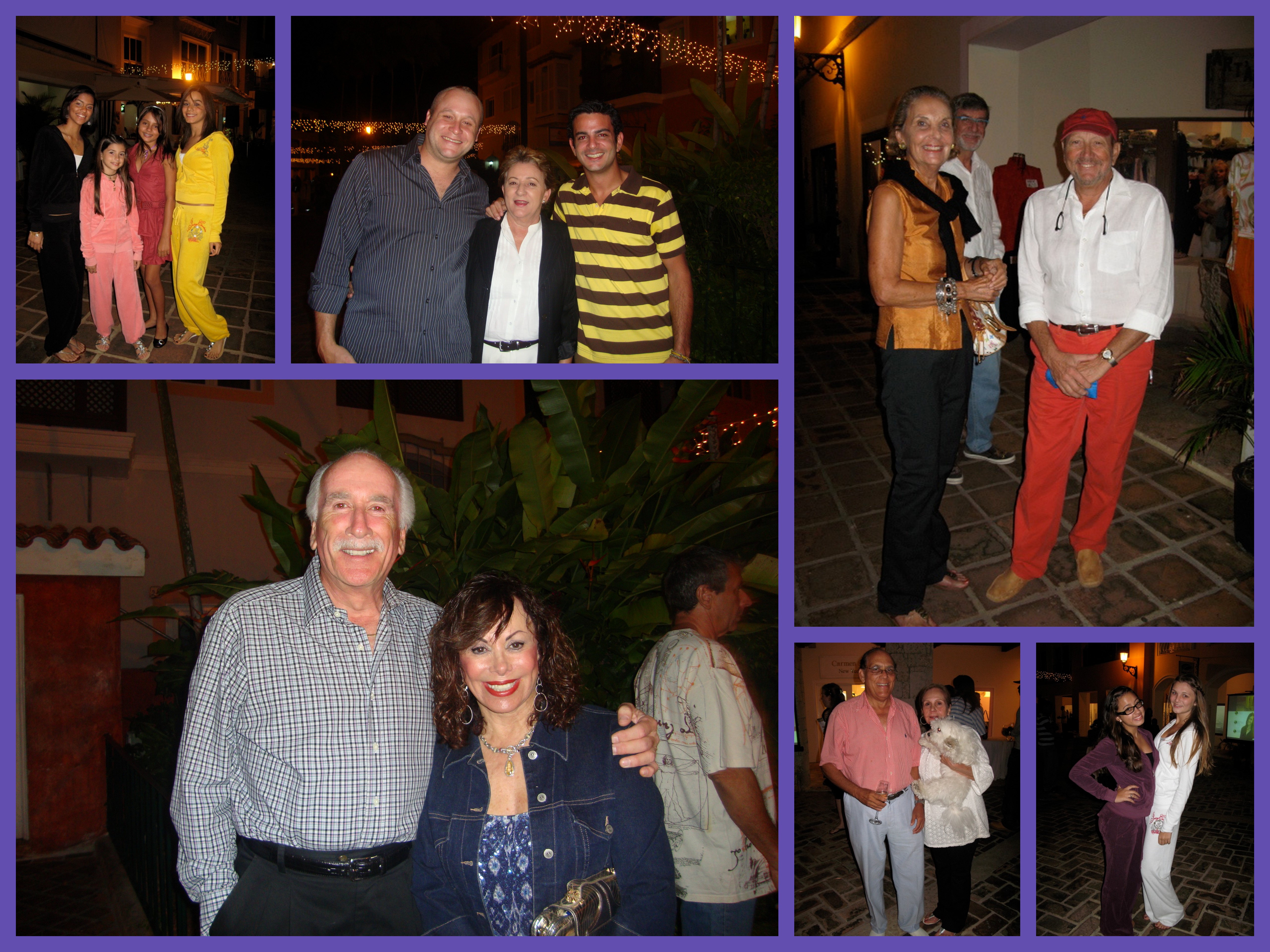 Last Wednesday the 6th of January, Casa de Campo Living teamed up with the administration and shops of the Marina Casa de Campo to host the Marina’s first street fair – Feria Barlovento. The event was a huge success and attracted over 500 Casa de Campo villa owners, residents and visitors!

The event formally opened at 7pm, when sales racks, product displays, lounges, bars, food, a caricaturist and the Juicy Girls appeared on the Marina Casa de Campo’s main shopping street, Calle Barlovento, after which the street fair received its name. Calle Barlovento was buzzing with activity and excitement all night as Casa de Campo villa owners, residents and resort guests strolled along and enjoyed a wonderful evening with beautiful weather, spectacular specials and a little music and entertainment, which continued until after 11pm.

Involved in making the evening such a resounding success was the Marina administration, without whose support the event would not have been possible, as well as all the businesses who did so much to make the evening so special.

Bewitched Cafe [info], who converted themselves into the ‘Casa de Campo Living Lounge’ for the evening, with a DJ, free sandwiches and smoothies, as well as a Ron Atlantico bar. Ron Atlantico, is THE Dominican premium rum (and the best rum I’ve ever tasted) – it is blended from a unique mix of the Dominican Republic’s finest aged rums, and has a heavenly, smooth and sweet flavor.

Bleu Marine – had a charming model boat exhibition outside their store, showcasing some of their most unique hand-made model yachts. Bleu Marine specialize in made to order replicas of your own yacht. The quality craftsmanship of the boats is exceptional and a remarkable example of what “Made in the Dominican Republic” can mean.

Emilio Robba – although at the far end of the Barlovento street was very popular with Casa de Campo’s feria-goers, and was full almost all the night. The shop assistants dressed up especially with flowers in their hair and had created a number of special displays and offers for the evening inside the store.

Elementos, Dedon and Arte Varelli – the Marina’s furniture stores all took part by showcasing their furniture out on the street, creating fun and relaxing lounges which really showed off their wonderful and unique styles.  Offering customers and passersby the opportunity to come and experience the relaxing and unique nature of each of their collections.

Mediterraneo,  SLAM, Azzuro and Carmen Sol New York clothing stores all set up ‘sales’ racks outside – with SLAM bringing their clothes down to the event all the way from the Marina pier so they could participate. All were offering some fantastic ‘one-night-only’ discounts of up-to 50% and some had even set up their own satellite bars – where they were offering free food and drinks to customers and hungry and/or thirsty passers-by!

Art’ Arena: clothing, artisan jewelry, and beach-essentials shop was incredibly popular all night, not surprising given the discounts and special offers they had – beach tops were only $10 and many other items had up to 40% off! This hidden gem of a store experienced a great deal of interest the entire night, though we would like to think it was due to being our neighbors for the evening… though the discounts and quality merchandise might also have had some influence.

Chinois Restaurant, although outside the main ‘feria’ area, Chinois took full advantage of the extra traffic to the Marina by preparing a special Sushi offer of 1 Sushi Roll and 1 Presidente beer for only RD$200.00 all taxes included! As a result Chinois was packed all night – especially thanks to Patricia Proaño who brought a table of 16 hungry shopaholics! While we regret that we did not make it there that evening, we’ve heard many great things and hope that Susana Joa will be providing such a great special again soon! (NOTE: As Susana is an avid reader of Casa de Campo Living, so if enough people leave a comment, she could easily be convinced!)

Also involved in making the night’s festivities such a wonderful experience were:

As the official organizers of the event, Casa de Campo Living would like to thank everyone who helped make this event the great success it was! We would like to give a big thank you to the Marina Administration and all the Marina Casa de Campo businesses for participating and making such a fantastic effort (on such short notice) with your fantastic offers, discounts and displays. We would also like to thank you to the Juicy Girls for taking part in the Catwalk show – everyone loved you, you were all fantastic! Lastly, thank you to Sebastiano di Bari, of Carmen Sol New York, whose encouragement and positive attitude help keep us enthusiastic!

Last but not least, we would like to thank the Casa de Campo community and everyone who attended! Below are a few photos of some of the wonderful people we bumped into (or stalked) during the event.  THANK YOU!

While the Feria Barlovento will be repeated in the not too distant future, stay tuned for our next events! We have a few interesting ideas up our sleeves.