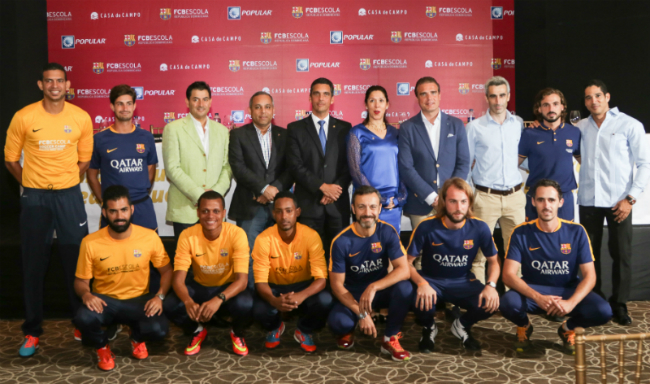 Last Tuesday, September 8th, FCBEscola presented the outlines of the 2015-16 season and announced the official launch of its new headquarters in Casa de Campo.

The first to address the audience was Iñaki Andreu, who spoke on FCBEscola’s mission and its values, its operation and its growth in the country. He also shared his expectations for the 2015-16 season, and a bit about the integration of the Casa de Campo and Santo Domingo headquarters.

Then, Fabeka Lebrón highlighted the incidence of FCBEscola in the country, marking a turning point in the history of soccer in the Dominican Republic and the responsibility of the school to continue to grow and set trends due to their leader condition, and concluded by thanking the collaboration of FEDOFUTBOL to FCBEscola and the sponsorship of Banco Popular.

Then, Rafael Torres took the stand to express that “after the success of the FCBEscola clinics and camps held over the summer and after we found that in the eastern part of the country there is a significant number of young football fans with a lot of vocation and excellent conditions for this sport, we have taken the initiative of having the FCBEscola school running all year long in Casa de Campo, a project that we hope will have a great reception”.

The event concluded with a video summary of the activities of the FCBEscola RD during the 2014-15 season.

The following photos were taken during the conference of the official launch of the headquarters of FCBEscola in Casa de Campo last Tuesday, September 8th: