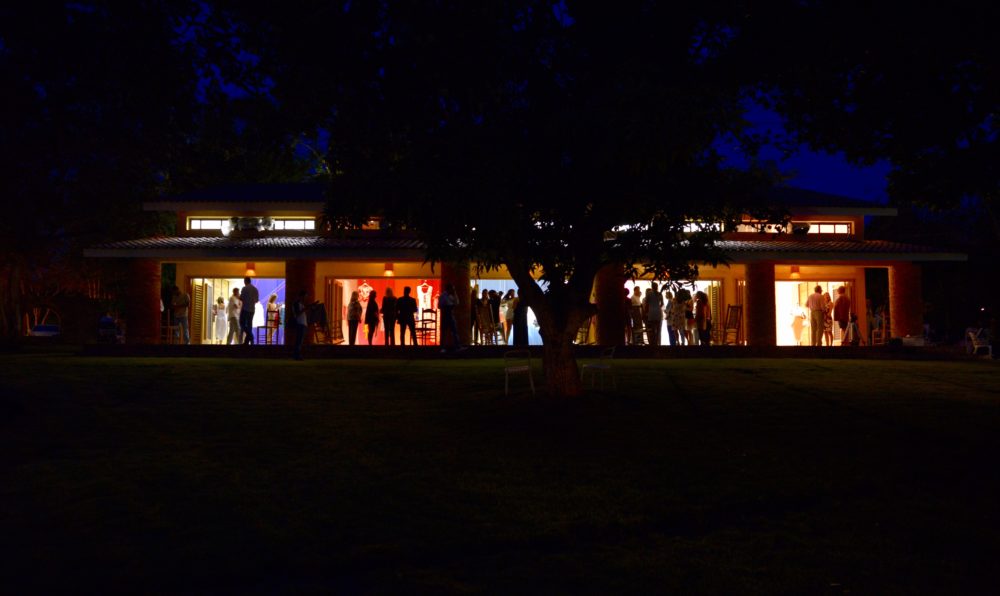 The fashion students of Altos de Chavón School of Design presented their final collections this past Wednesday night in the Davidoff Studios. Although much of Casa de Campo has simmered down in the last few weeks, all who were in town flocked to the eagerly awaited exhibition. 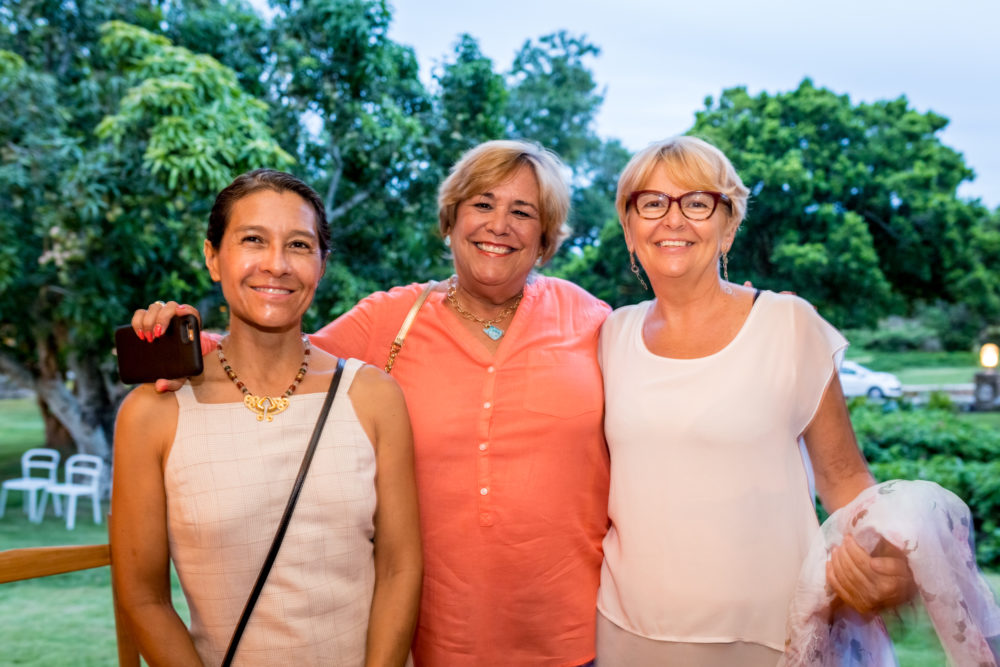 Visible from the outside, the Davidoff Studios were alight in multi-colors showcasing the individuality of each gallery. With five differently themed rooms including Nature Room, Pink & Co., Black, White and Grey, Jamaica, and Oil Spill, the design class displayed their final products that featured both originality and cohesion among the collection. The Nature Room consisted of earth tones and soft textures, from a suede asymmetrical cropped top by Namie Takata to a long burgundy velvet gown by Layssa Bencosme, and variations in between; the room radiated an urban and cool weather approach to our resort island. 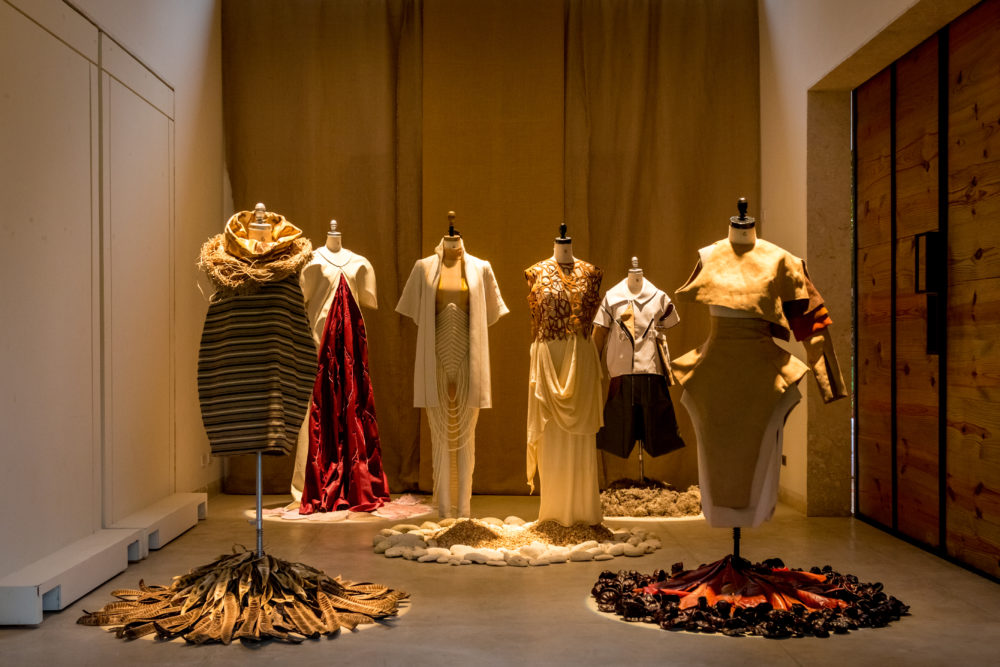 A standout favorite among most visitors, what may have made the room so special was Director of the Fashion Program, Marina Spadafora’s intent to connect the collection with nature. For two months, she actually searched Casa de Campo hand-picking flamboyant leaves, pacara earpods fallen from the trees, sand and stones, moss, and even coral from the beach to accompany these pieces. Talk about vision! Here, nature brought out the organic shapes and earth tones of the clothing. My favorite piece in this room was made by Paola Segura that took nods from history to inspire her creation. Drawing upon the bareness of the Taíno Indians, she formed a harness of threads over a nude mesh bodice embroidered with gold. The outfit became more modest with the addition of a refined coat, whose structure reflected the conquistador period. 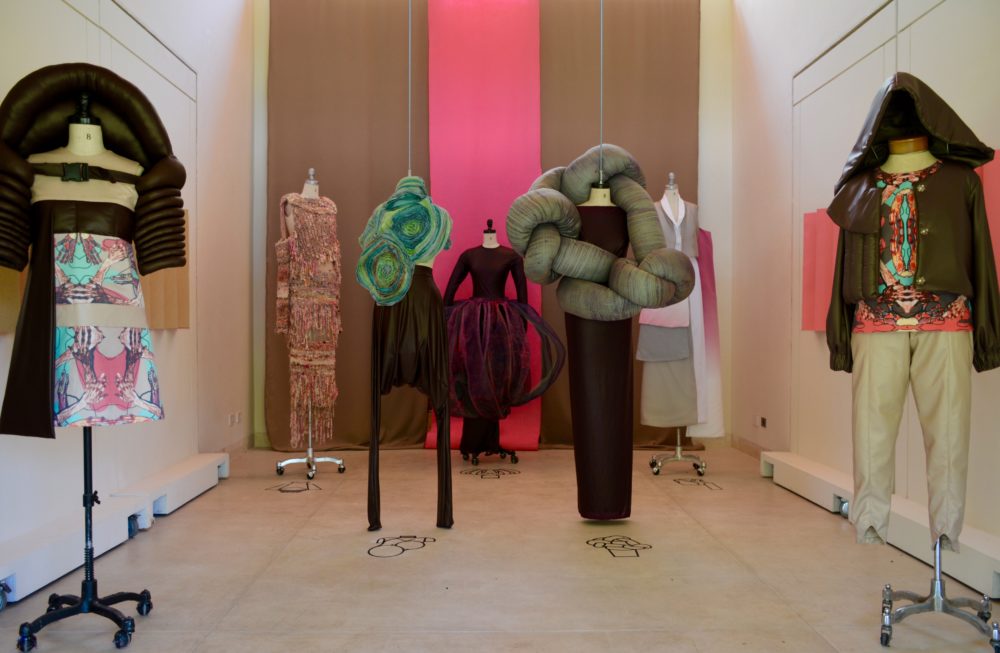 In “Pink & Co.” exceptional pieces made acknowledging the success of the Fashion Program at Chavón very easy. Though what was not easy was the students’ elaborate effort in crafting such designs. Kristy Guzman, designer of a beautiful cream and rose knitwear dress created her own loom to knit the dress together! Julia Abreu patterned two dresses using cheesecloth. Originally white, the cheesecloth was spray painted in beautiful shades of pink, purple, and teal and sewn using boning into a large hoop-skirt format. She also used the same material to place over jersey fabric and transfer a spray-painted design into a tubular dress. In more ways than one her garments were inverses of each other. Also in this room, Gloria Mejia, who created two very cool puff brown jackets fit for eskimos, will be entering Parsons in New York in the Fall to complete the two years for her degree. The talented student walks in with a full-paid scholarship. 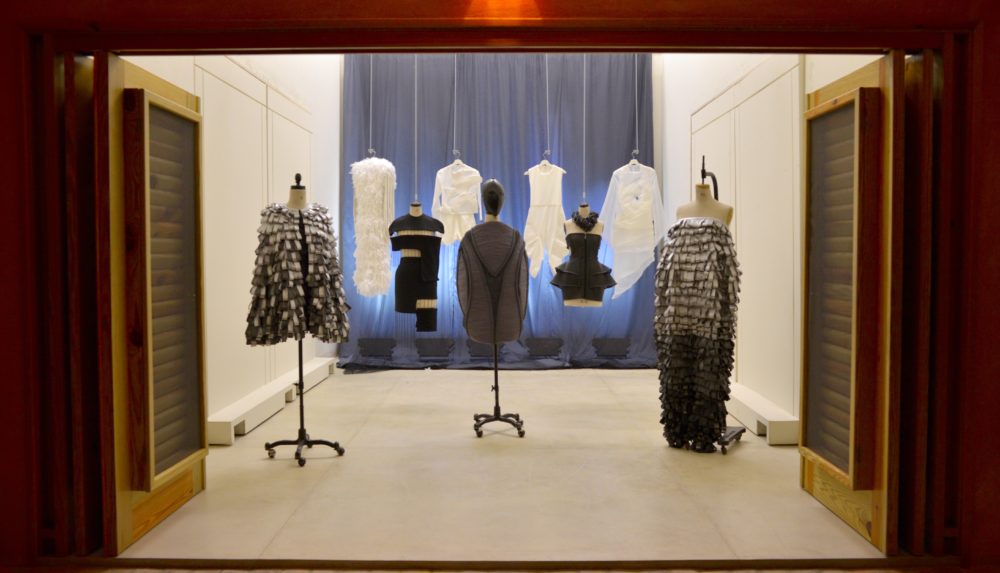 In “Black, White and Grey,” the room exuded modernity with a touch on the past. In a silhouette that would no-doubt be a staple in Santo Domingo, Kilmarie Cepada formed a dress from the rubber fabric you place under carpets to keep them from slipping. The sexy, peplum black dress featured a strapless necklace, partial back cutout, and exposed zipper down the front body. The look was completed by a bold circular layered necklace. White jumpsuits by Maria Sofia Fernandez placed geometry at the forefront with total wearable, resort chic designs; while Nini Liriano hinted at the past with a long, white feathered frock (I was impressed by this garment’s weight!) and Cecilia Svoboda used shades of silver and grey in a looped dress and coat design that called upon the flapper era. 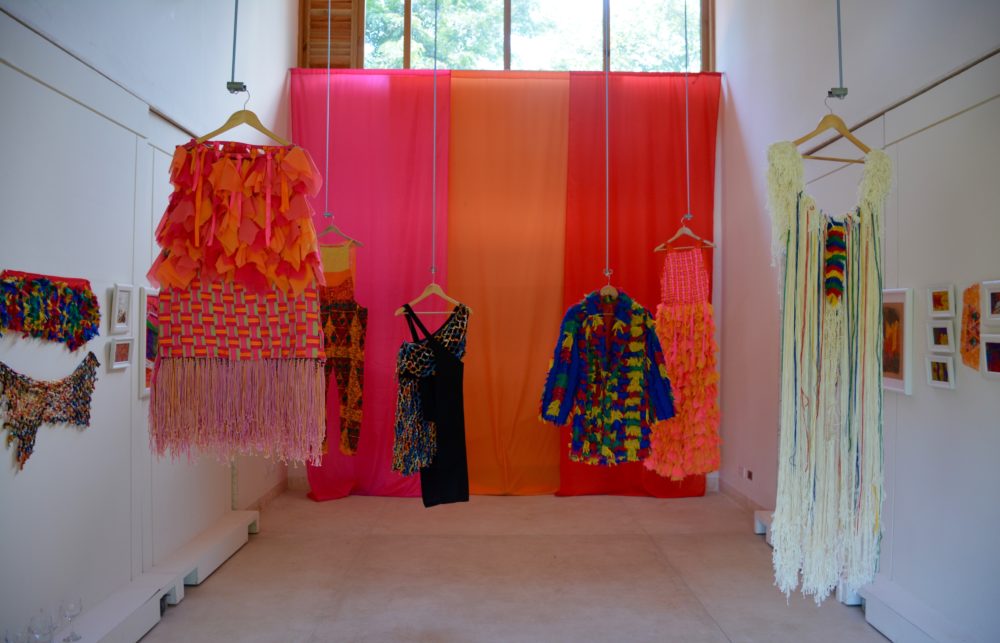 The “Jamaica” room shined with a vibrancy that didn’t need much explanation. Fabric manipulation was a strong theme here as guests viewed weaved bodices and skirts, patchwork, and crochet. What I found most appreciating was the student’s fabric samples tacked to the walls- it was a way to view the finer construction methods of the garments and was a worthy exhibit on its own. From this room, Phyllis Berney purchased a fringed coat in blue, red, yellow and green by Camila Cortez. The fabric she bought in El Salvador, her home country, was originally in stripes that she cut apart to make fringe. She weaved the fabric back together on her own loom. 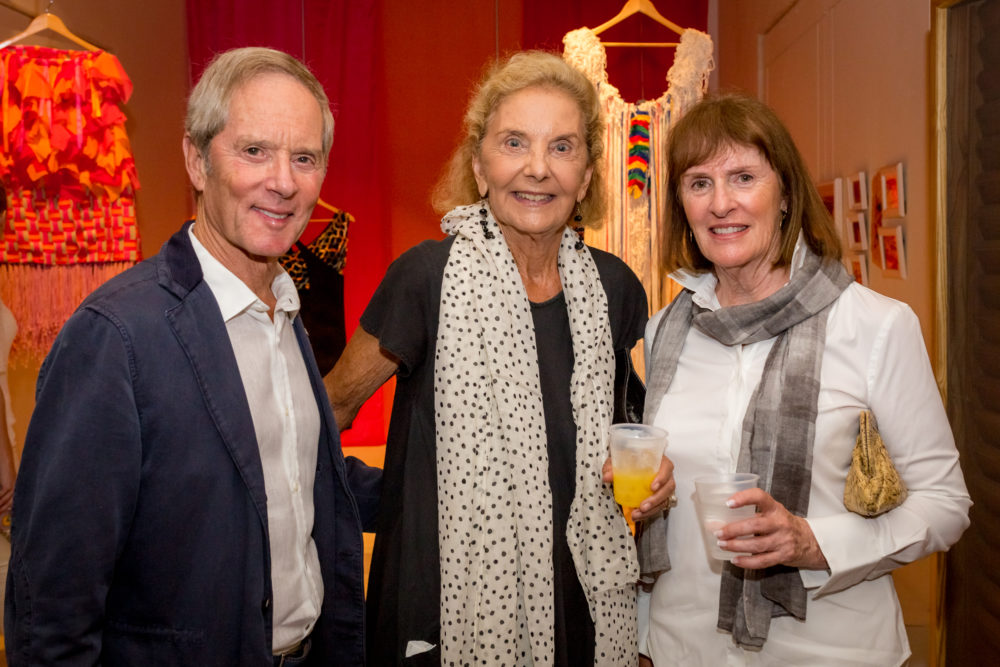 Camila also crafted a striking long dress made purely of strings, each tied individually. This was a look I could imagine many Dominican women wearing during the summertime as a beach coverup. Doris Rodriguez created her own block print using Shibori, the Japanese technique of dyeing, and hand embroidered the bodice in gorgeous beading. 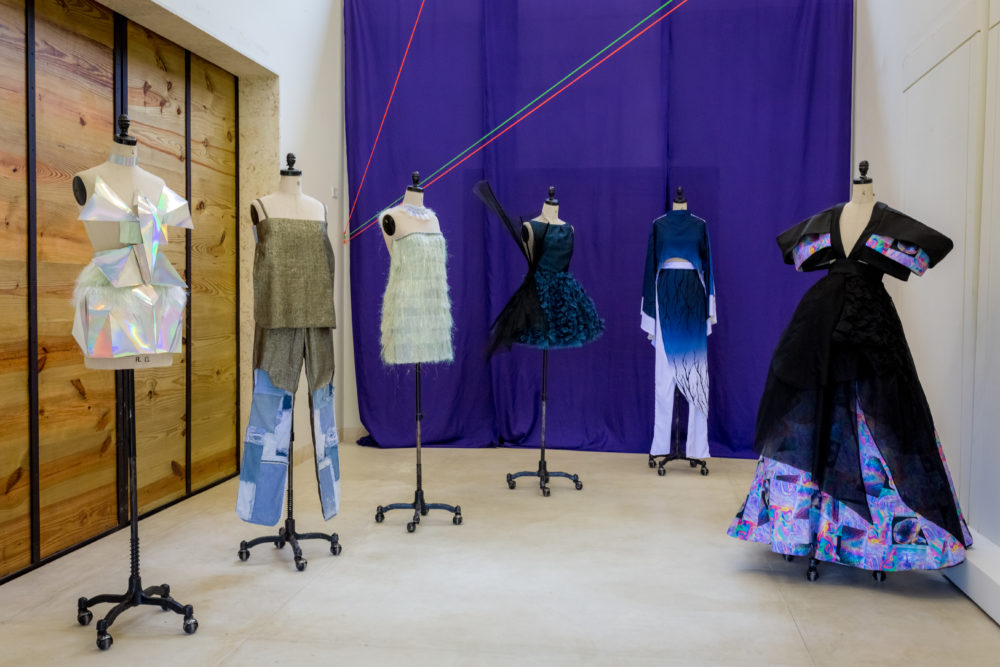 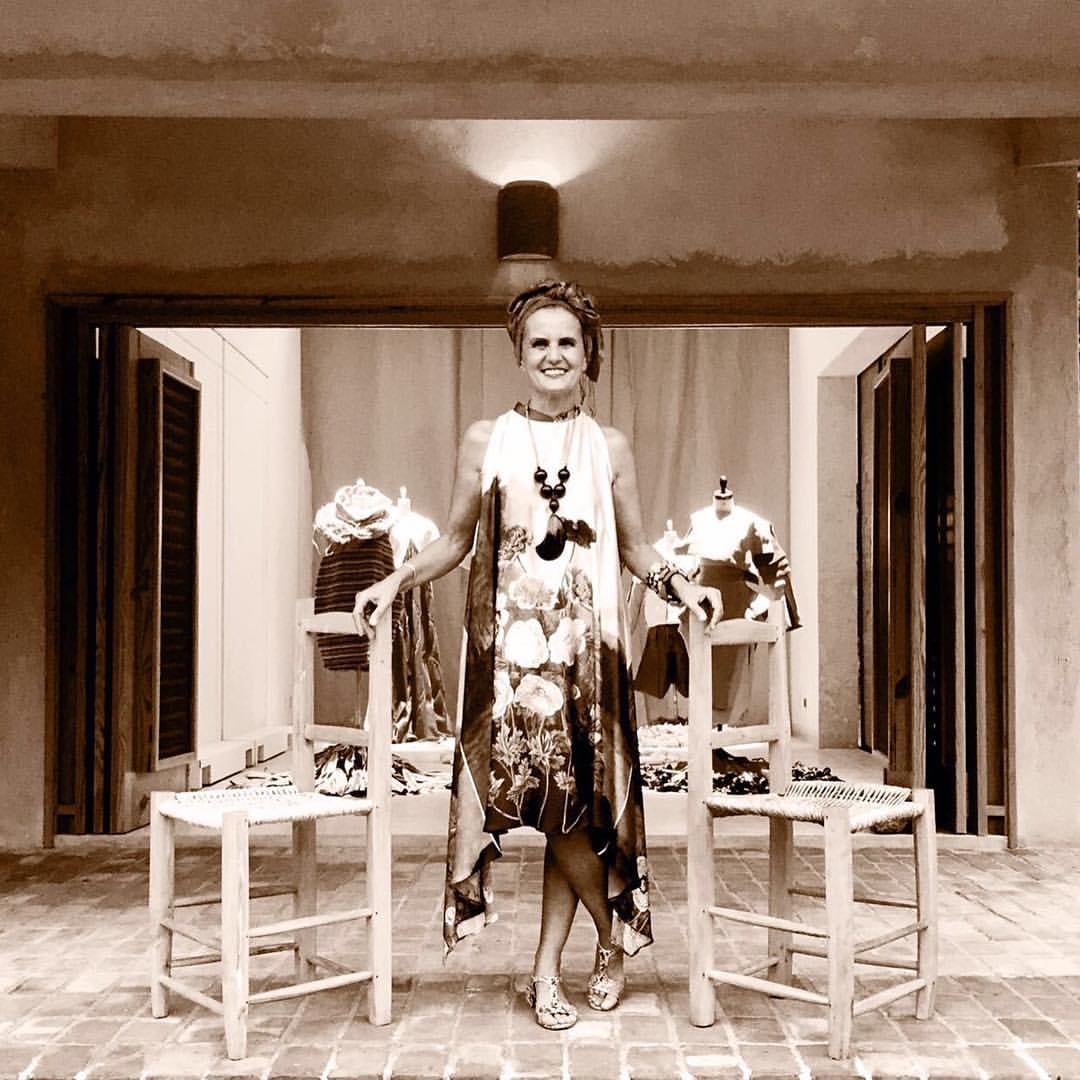 In the final gallery “Oil Spill,” garments reflected an iridescent theme of dark colors with metallic tones. The room itself was dark and lit by LED lights. A witchy blue dress overlain with a stiff black mesh fabric by Vanessa Pujol reminded me of something Angelina Jolie would wear in Maleficent. It was a strong combination of feminine fragility with edgy structuring. Laura Gonzalez’ garment whose idea revolved around a cherry blossom tree was a design concept that personally impacted her career. In the beginning, she wanted to use pink appliqué to capture the tree’s adored springtime bloom, but after much contemplation arose with the unique notion to capture the tree’s darker side, hand-painting its bare branches in a winter-esque motif. 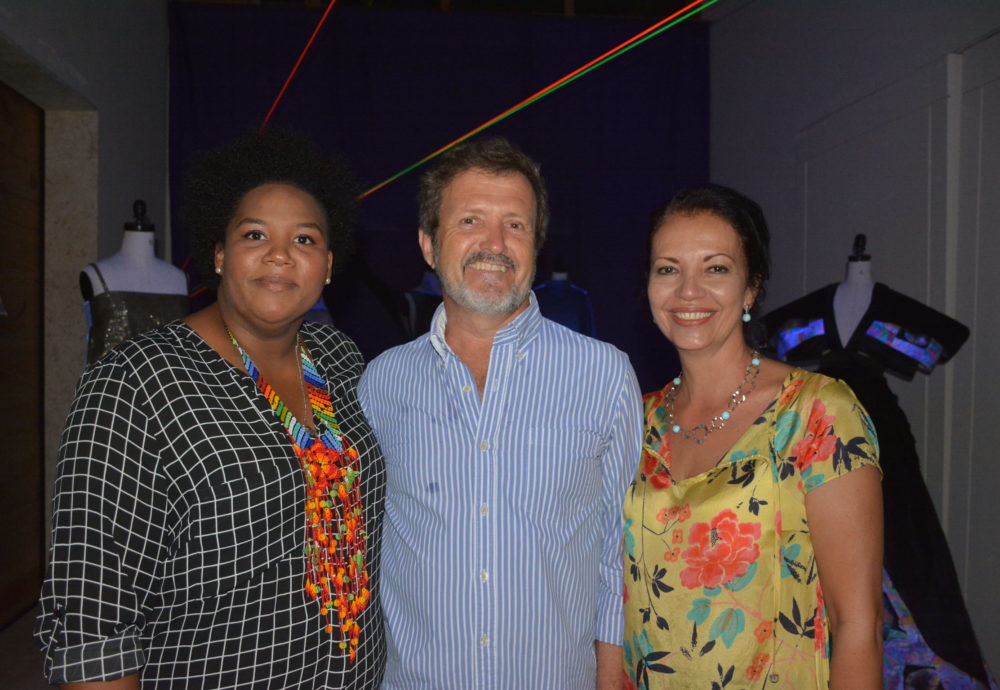 The beauty of Altos de Chavón School of Design is that it challenges its students from their original creations to a more thought-out and creative level of design. The overall exhibit gave strong attention to fabric manipulation and incorporated very technical skills and processes by the students. Marina Spadafora says this exhibit reveals “A call to creativity and freedom. It’s bringing Chavón back to its roots.” The collection was so raved about, it has now made its way to Santo Domingo -hidden from the public eye- ready to hit the runway in October for Dominicana Moda! 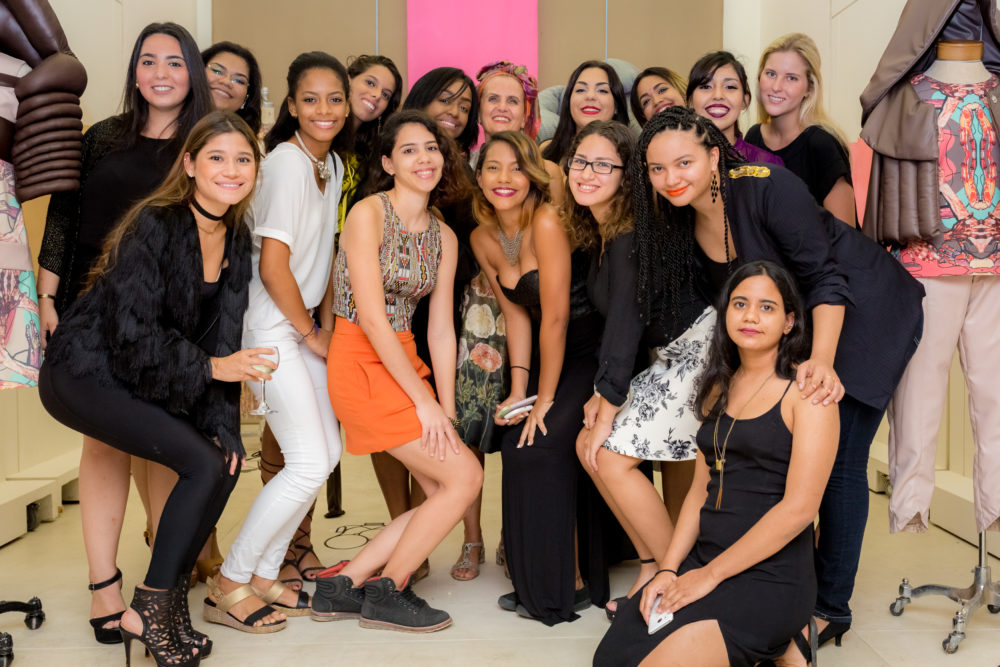 The following collection of photos were taken by Parker Duran on Wednesday, May 11th at the Davidoff Studios in Altos de Chavón for the exhibition of the design students’ final projects:

And by Alfredo Esteban: 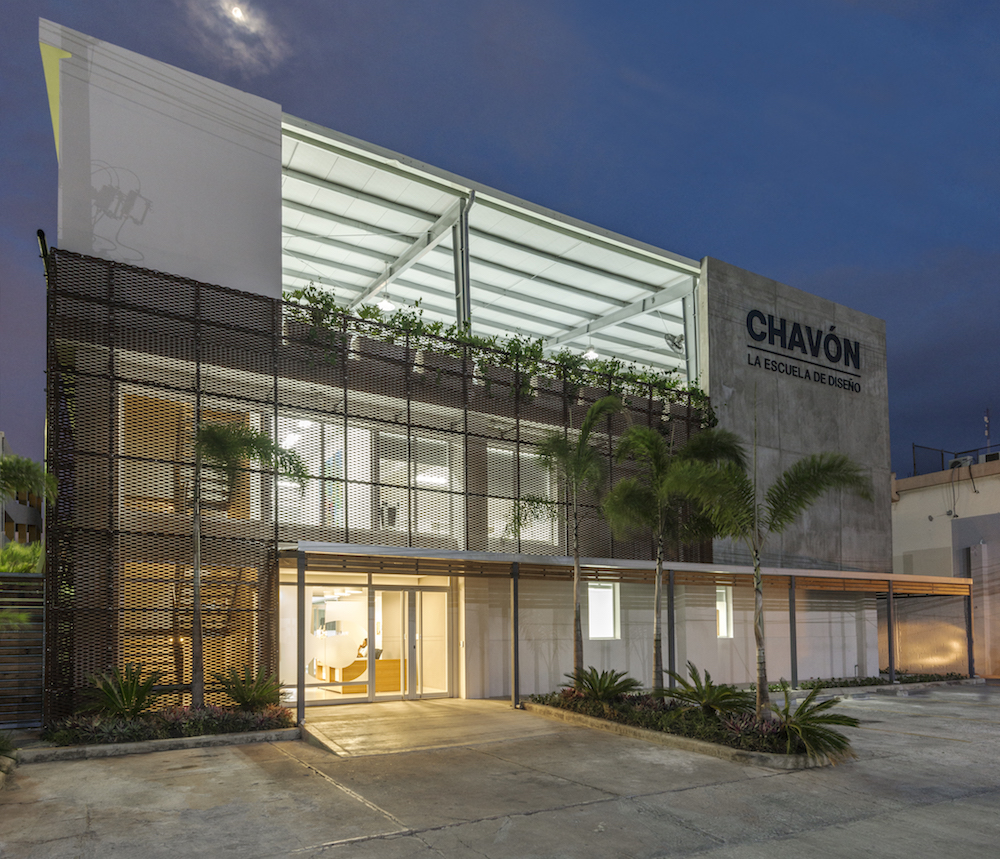 In an expansive and ultra modern facility, the Altos de Chavón School of Design inaugurated its new campus in Santo Domingo on Thursday April 21st. After three decades in its premier location in Casa de Campo, several programs make their way to the capital this Fall to integrate students into the country’s fast-moving and ever growing art scene. 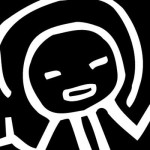 The Altos de Chavón Cultural Center Foundation, located in Dominican Republic, is a non-profit cultural and educational institution. Since 1983, it has been dedicated to the creation of a multifaceted arts community that includes visual arts, crafts workshops, performing arts and teaching programs.

With its other components—The Regional Museum of Archaeology, the Artists in Residence program, The Gallery, and The School of Design—The Foundation has contributed to the enrichment of the intellectual, artistic, and cultural panorama of the Dominican Republic for more than 30 years.

The Foundation’s work has reached many, with impressive results. Its diverse educational and arts programs, gives Altos de Chavón the cultural dynamism that nourishes and stimulates the creativity of the designers and artists of today and tomorrow.

In 2013, The Altos de Chavón Cultural Center Foundation celebrated 30 years of continuous and invaluable contributions to art and culture in the Dominican Republic giving each artist the opportunity to find their individual expression through constant research and development.