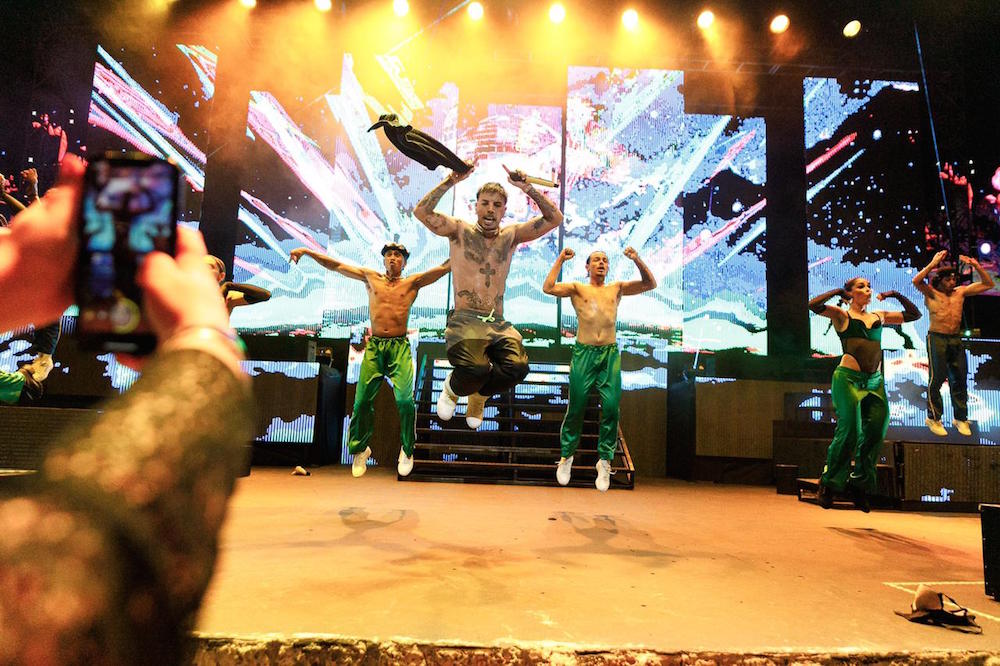 For the first time in Altos de Chavón’s history, a single artist has performed for two nights in a row and with a resounding success at it! The versatile and energetic Puerto Rican artist Rauw Alejandro had the audience singing and dancing the night away!

Originally scheduled for one night only, producer Gamal Haché and the artist had to open a second night to please their fans after having sold out in record time. Doors opened at 6 pm, and at 7:00 pm two DJs were in charge of hyping up the attendees to the rhythm of dembow and reggaeton before Rauw got on stage.

Following the DJs, the up-and-coming Puerto Rican urban exponent Eix took the stage, officially opening the concert, and sang about five songs, among them “Infiel”, which features Rauw Alejandro that had the public singing along with him. After his presentation, Eix thanked everyone for their support and left the stage.

Half an hour later, the amphitheater was filled with the notes of “Todo de ti”, and Rauw Alejandro and his dancers got on stage. The show began with the song  “Dile a él”, “Mírame” and “El efector”, where the artist demonstrated his dancing abilities by following up with his dancers whilst singing. The show continued with popular songs such as “Que le de”, “Enchule”, “Nubes”, “Desenfocado”, “Química”, “Ponte pa mi”, among other hits that pleased the audience both nights in a row.

In between songs, the artist thanked all Dominicans for the support they have given to his career, this being the country where his music has had the greatest reception. He also honored ‘old school’ reggaeton by singing “Soy una gargola” (2006) by Randy Nota Loca and a remake of “Dembow” with Yandel.

The popular Puerto Rican artist Rauw Alejandro ended his concerts at Altos de Chavón with the song “Todo de ti”, the most listened to of the summer on Spotify, which has more than 360 million views on YouTube since it was released just over four months ago.

Even though most were expecting to see more guest artists thanks to the many collaborations that he’s had throughout the years, many of the attendees were happy with how both nights turned out, including how the amphitheater had been special areas accessible for people with disabilities allowing them to enjoy the night and their favorite artist. People also commented on the health and safety protocols throughout the events, where everyone was required to have their vaccination card, a face mask, and their temperature was taken at all the accesses of Altos de Chavón to comply with the provisions of the health authorities and thus guarantee the safety of the public.

All in all, we are sure most can agree that the Puerto Rican artist carried out two concerts full of color, good choreography, and scenic quality that left his fans completely satisfied.