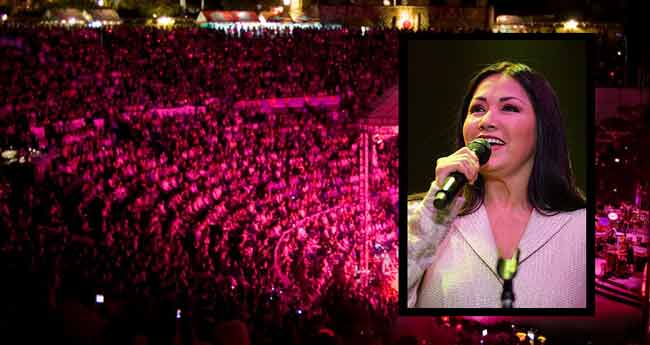 Great news!! Next Saturday June 9th, famous Mexican singer, Ana Gabriel will be performing at the Altos de Chavón amphitheater, a concert which will be filmed for her new CD-DVD – and YOU have the opportunity to attend!

Yup! Ana Gabriel, well known in Latin America for her unforgettable songs “Quién como tú”, “El Cigarrillo” and “Ay amor”, will be performing at the Altos de Chavón amphitheatre, where at 7:30pm she will meet again with her Dominican fans!

The concert, which will feature traditional Mexican “mariachi” music and local local Dominican merengue artist, Eddy Herrera is being produced by Sony Music is to be recorded for her new CD-DVD, which will be released this September.

“Altos de Chavón is a beautiful and magical place and Dominicans are well known for their warm hospitality. It will be the perfect platform for this great moment in my carreer, an unforgettable experience”

The concert is FREE!

Wonderful news for all of her fans in La Romana and in the Casa de Campo community, as well as all over the country – Ana Gabriel’s show will be completely free! According to her producers (Sony Music), this will be a “by-invitation-only” show and tickets will mainly be given out on national radio stations soon…..

HOWEVER Casa de Campo and the Altos de Chavón amphitheater have successfully secured a number of tickets for Casa de Campo villa owners and residents – tickets are available at the Casa de Campo Villa Owners Club. Please make sure you get your tickets early to avoid disappointment!

Ana Gabriel was born as María Guadalupe Araujo Yong, in Santiago de Comanito, Sinaloa, Mexico. She first sang on the stage at age six, singing “Regalo A Dios” by José Alfredo Jiménez. She moved to Tijuana, Baja California and studied accounting. At age 21, in 1977, she recorded her first song, titled “Compréndeme”. During her long career, she has hits in three different genres of music: rock en español, Latin Pop, andrancheras. In 2006 she received the Lo Nuestro award’s “Premio a la Excelencia” (Excellence Award).

And we are so excited too!! Below are the details for the Ana Gabriel concert – we look forward to seeing you there!

Tickets: Casa de Campo villa owners and residents can collect tickets at the Casa de Campo Villa Owners Club. But please remember this is a “by-invitation-only” event so please collect your tickets in advance!