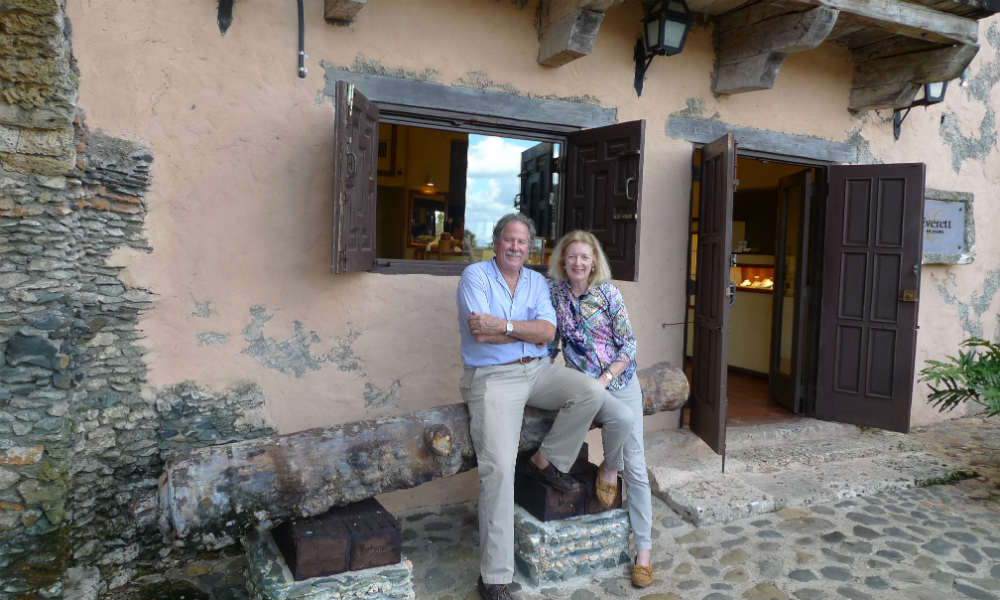 Have you been to Everett Designs, one of the most enchanting and sparkling stores in Altos de Chavón? Located right next to The Gallery, Everett Designs is a must when visiting the famous artists village.

The store is a wonderful expression of art with an incredible collection of jewelry. Founded by William and Rosemary Everett in the 1970’s, they have been creating jewellery for the Casa de Campo community and visitors ever since. That’s nearly 40 years of experience! Growing, adapting, developing, and creating timeless jewelry in their workshop which also serves as the space for their store, is part of their legacy with Altos de Chavón.

What is best about Everett Designs is the materials they work with, not only do they use deep sea and freshwater pearls, exotic colored precious and semi-precious gems, but also some of our very own unique to the country like amber and larimar. Amber is mined high in the mountains of the Dominican Republic, and formed from 20 to 30 million years ago. This solidified resin is found in transparent hues of yellow and gold, and more rarely red, blue, and green. Dominican amber is also notable for its inclusions or fossils of insects and plant material, often perfectly preserved. Who remembers Jurassic park, the first one? Larimar, is mined near the town of Barahona on the southwestern coast of the Dominican Republic, and is the only known site in the world for this lovely gemstone. The name Larimar derives from a combination of “Larisa,” the daughter of a native jeweler and “mar,” Spanish for sea, due to its blue hues.

Plus, Everett Designs carries an amazing collection of rare 17th and 18th century silver and gold coins! Their ‘Treasure Coins’ collection features coins ranging from ½ Real to 8 Real. Their shapes are mainly due to crude manufacturing, and which is also why they are called “cobs” for their irregular hand struck shape and were produced primarily in Mexico, Potosí, Bolivia, Lima, and for a short period even here in Santo Domingo for the Kings of Spain before 1772. Due to the way that they were made, the majority of the coins have only partial markings. The most important feature of these coins was the correct weight and fineness of the bullion attested to by the mint mark and assayer, who tested the gold and silver for purity, determined the tax due and when it was paid he would stamp them and it could them be legally taken to Spain.

Many of these coins are from shipwrecks that occurred in the Caribbean region, and from land excavations throughout the Caribbean and South and Central America. Everett Designs is particularly proud to carry coins from “Nuestra Señora de La Concepcion,” a Spanish galleon that wrecked off the north coast of the Dominican Republic on its way to Puerto Rico for repair in 1641, after being severely affected by a violent thunderstorm and abandoned by the Captain. The wreck is so important to the history of our country since it is the only treasure ship ever discovered to have direct connections with our colonial period. The shipwreck was found 45 years and 80 days later near Puerto Plata by William Phips and his crew who had gone out several times in search of the treasure.

These, as are the other gems, amber and larimar, are all mounted in 18k gold and 925 sterling silver to produce an original collection of jewellery: necklaces, pendants, rings, bracelets, earrings and cufflinks. Each magnificent coin is accompanied by a certificate of authenticity which you get to keep once you purchase one of the pieces.

Don’t miss out on one of their most recent collections including pieces mounted in a combination of 18k and oxidized silver! The unique, rustic hardware is to die for!

So now that you know more of the history behind their collections and have a glimpse of their most recent one, visit the store to see the unique details and definitions in person. Plus, you’ll be able to feast your eyes on the huge 17th century cannon recovered from one of the shipwrecks located just outside of their store!

Where: Altos de Chavón, next to Art Gallery