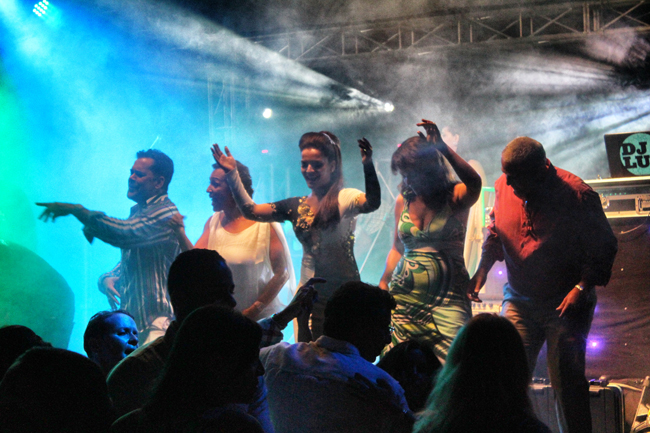 Finally! Here we bring you all our fun photos of the party of the year – the beach party of the Dueños 2013 celebration!

The Dueños event, hosted every year by Costasur and Casa de Campo for Casa de Campo villa owners is always a pretty awesome day, when we get to have a great time enjoying all the sporting activities (and more!) Casa de Campo has to offer, ending with a fabulous dinner.

But this year, Costasur and Casa de Campo took the party to new heights of awesomeness! Everything from the super cute pink t-shirts, to the delicious cooking exhibit with Mamma Egi (Maccioni) and all the sports, was incredible, but the party on the beach, was, yes I’m going to say it again, EPIC.

Admittedly we weren’t sure how a beach party for Dueños would work out, us, like everyone else had become nicely accustomed to the Dueños party routine of the last few years; dinner, drinks and dancing at the La Romana Country Club. A formula that worked and that we all enjoyed. So when we heard it would be at the beach, that raised all sorts of questions… What about the sand? Where will it be? What about the tables? What about the music and dancing? Fortunately, “it was all alright on the night” as they say, and we had the best time dancing the night away in the most idyllic tropical location.

With cocktails, wine and beer served by an army of impressively efficient and attentive waiters, no matter from where you choose to enjoy the party – the cocktail area inside the Beach Club by Le Cirque restaurant or at one of the many lounges covering the main beach area, or even the dance floor – we were never left wanting for drinks, or even food.

Again in a break from tradition, the “dinner” was served in the form of “heavy hors d’oeuvres” from an”Asado Argentino” with many of the delicious dishes being cooked (throughout the day) over open bonfires in the sand. While many choose to pick throughout the night from the constant flow of picaderas, another popular option was to get your preferred cut carved hot directly off of the meat cooking in the sand. It doesn’t get any better than that.

As the night progressed, our hosts Alfonso Paniagua Vice-President and Administrator of Costasur Casa de Campo and Dr. Claudio Silvestri, President and CEO of Casa de Campo took to the stage to thank everyone. Following which was the prize-giving for the dozens of sporty Dueños (Casa de Campo villa owners) who had won prizes in the tournaments played earlier that day.

Lovely lady winners of the Dueños 2013 tennis with Emilio Vasquez

And then the party really got started! With live music from Victor Mitrov, who was outstanding. A far cry from his romantic, relaxing performances we regularly enjoy  at the La Caña by Il Circo, Victor Mitrov literally rocked. Singing, dancing and exciting the crowd into a frenzy, some even joined Victor of the stage to dance along. It was legendary… so much so that some of our photos and videos cannot be published!

But the party didn’t end there, following the departure of Victor Mitrov DJ Luz took to the stage and carried on the party where Victor had left off… with the highlight being the dancing performance of a young boy (photo below), who danced circles around all us old folk! A truly epic night that we will remember as the best of 2013!

The legendary dancing boy of Dueños 2013!

Congratulations to Costasur and Casa de Campo. We loved it!

The following collection of awesome photos were taken during the Dueños 2013 beach party at Minitas Beach, Casa de Campo, a celebration hosted by Casa de Campo and Costasur: