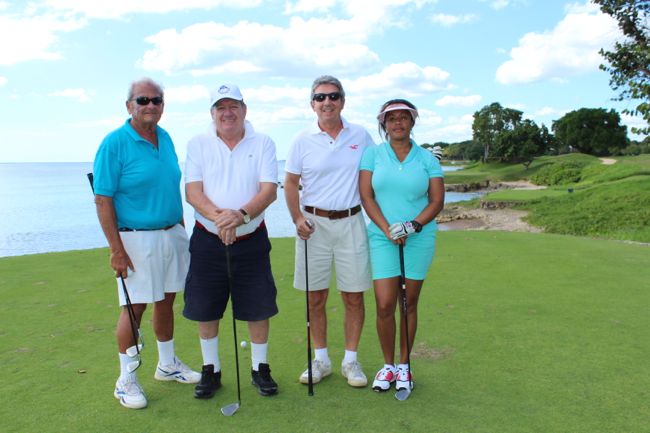 Always one of the most popular and well-attended activities of the Dueños celebration is the golf tournament, which was a great success!

This year the more than 150 Casa de Campo golfers teed off around Casa de Campo’s Pete Dye designed Links and Teeth of the Dog golf courses, both in fine conditions following their annual maintenance in the summer months.

Teeing off shotgun at 1pm the enthusiastic Casa de Campo villa owners all stepped up to the tees with the desire to be crowned the Dueños 2013 golf champion! The Dueños 2013 golf tournament was played, as is the tradition with this event, in the format “individual stroke-play”, giving those very best players the opportunity to really shine.

Those playing on the Teeth of the Dog were blessed with the most beautiful views of the Caribbean sea, glittering in all it’s splendor on such a perfectly sunny day, while those on the Links were able to admire the beautiful palm-tree fringed lagoons. A perfect day golfing in paradise!

Taking part alongside the many villa owners,  was Alfonso Paniagua, who as Vicepresident Administrator Costasur Dominicana was one of the hosts of the Dueños celebration. Alfonso played in a foursome with Alfy Fanjul, J.J Arteaga and Marco Martinelli, on the Links golf course.

Alfonso with Marco, Alfy and J.J on the Links, Casa de Campo

The winners of the Dueños 2013 golf tournament and all the other tournaments held throughout the day of Dueños 2013 were awarded trophies at the Beach Party celebrated at Minitas Beach later that same evening… photos of that coming soon!

Men – Teeth of the Dog

Women  – Teeth of the Dog

The following collection of photos were taken both on the Links and the Teeth of the Dog during the Dueños 2013 golf tournament hosted by Casa de Campo and Costasur: