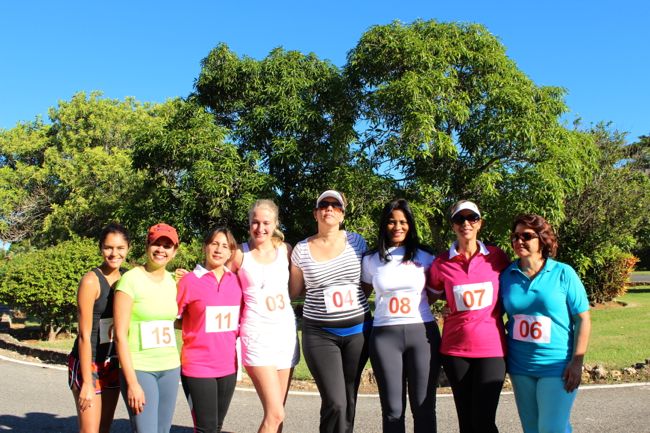 One of the very first events of the Dueños 2013 schedule was the Casathon, an activity which turned out to be quiet literally a “flight of the fittest”.

Having seen both Miss República Dominicana Universo (also the runner-up of Miss Universe 2005), as well as Miss Peru-Italia 2007 at the “Entrega de Regalos” (the giving of the Dueños souvenirs) at the La Romana Country Club the day before, we thought we’d seen it all! But as it turns out, we are surprised and impressed to discover that lurking among our fabulous Casa de Campo community we have some real running champions!

Scheduled to start at 8:30am, the more than 30 runners sprinted off from the starting line surprisingly punctually at 8:45am, following which the fastest were back at the finishing line just 20 minutes later – bursting through the ribbon both exhausted and elated, some even with enough energy to throw a nice pose for the camera!

Congratulations to everyone who took part, it was certainly a challenging race – there can be no doubt that everyone was certainly “in it to win it” – I’m glad I was waiting at the finishing line, I would have stood no chance trying to keep up!

A special mention must go to Camden Reiss, grandson of Polly and Mark Kisiel, who running alongside his father (Tobias Reiss) finished not only ahead of his dad, but in 7th place overall!! Bravo to a running super-star of the future! And not to mention that Camden, also then went horseback riding, and even attended the polo tournament later that same day! Ah to be young and full of energy!

The following collection of photos were taken during the Casathon of Dueños 2013 in Casa de Campo: