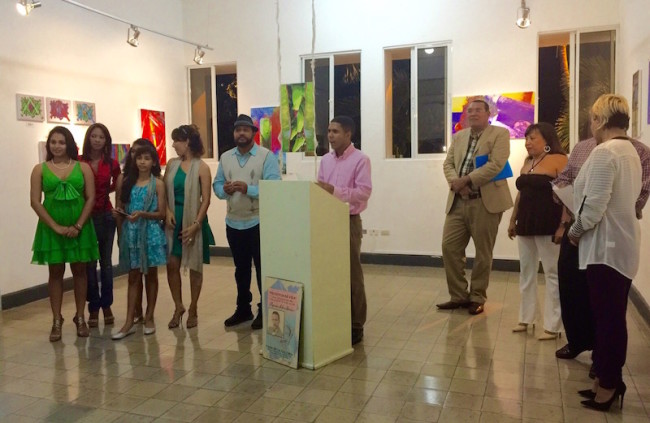 On Sunday, December 20th, a large group of local art enthusiasts gathered at the Santa Rosa de Lima Cultural Village for the opening of the exhibition, “Dreams on Canvas” by the filmmaker and scriptwriter from La Romana, Monchi Herrera.

In a room full of artwork by Monchi in his peculiar mixed technique style that combines photography and digital art, were members of the Casa de Campo community and important figures of La Romana, including renowned journalist, Hilda Peguero, who served as the master of ceremonies.

The multi-faceted artist expressed his amazement and gratitude for the support he received during the opening of his 15th exhibition in the country, and the first in a long time:

“I felt very happy for all the affection I have received from the attendees. Above all, I would like to thank everyone who accepts my works within “Dreams on Canvas”, after 11 years without exposing them in my country.”

“Dreams on Canvas” will be open to the public at the Aldea Cultural Santa Rosa de Lima until Sunday, January 24th. Don’t miss the opportunity to view the showcase and even purchase a piece that speaks to you and the dreams within.

The following photos were taken during the opening of the exhibition “Dreams on Canvas” by Monchi Herrera in the Santa Rosa de Lima Cultural Village: