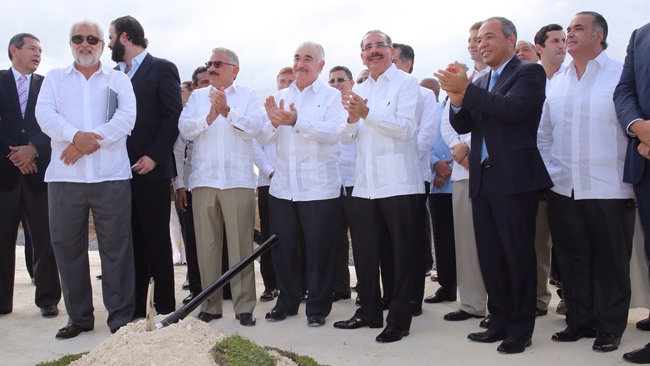 In this week’s edition of “This week in the Dominican Republic” we learn about a new natural gas project in San Pedro, the inaugration of 13 new schools this week and a farm project in the Lake Enriquillo area.

Work starts on a natural gas terminal in San Pedro

A ground breaking ceremony was held earlier this week to mark the start of the building of a natural gas terminal in San Pedro de Macoris, a town approximately 30 minutes to the west of Casa de Campo and La Romana.

In attendance at the event were both President Danilo Medina and executives of the group Antillean Gas, Ltd, among them Rolando Gonzalez-Bunster vice president of Antillean Gas and a Casa de Campo villa owner.

The building of the natural gas terminal will cost RD$13.0 billion (US$302.3 million), an investment which will mean major savings for the Dominican Republic, as a result of competitive prices and guaranteed electrical supply.

Rolando González-Bunster affirmed that the new plant will create cheaper, cleaner fuel. “We’re pleased with the Dominican government’s and the business community’s vote of confidence, since this major investment will allow good results for the energy system, the industrial sector and the entire country,” he said.

This week a total of 13 new schools were inaugurated across the Dominican Republic, 5 of which with ribbon-cutting ceremonies attended by President of the Domimican REpublic Danilo Medina, built at a total cost of RD$172.0 million in the Duarte Province of the country.

The opening of these schools in the Duarte province will give children, even from the poorest families, access to a good education – something which is essential for the future growth of this country.

Radhames Valenzuela, Director of the Dominican Agrarian Institute (IAD) announced on Monday of this week that 8 government projects in the area of Lake Enriquillo in the south-west of the Dominican Republic are now 80% completed.

These projects aim to aid thousands of families who were displaced from their homes following flooding, flooding which also severely damaged the areas farms and livestock. Families in this area essentially lost everything.

The projects are creating new farms – for family vegetable garden, as well as for the growth of corn. All areas are being equipped with modern irrigations systems  and reservoirs to store water.

“This week in the Dominican Republic” is a new column for Casa de Campo Living so if you have any comments or suggestions we would love to hear from you – please use the form below.