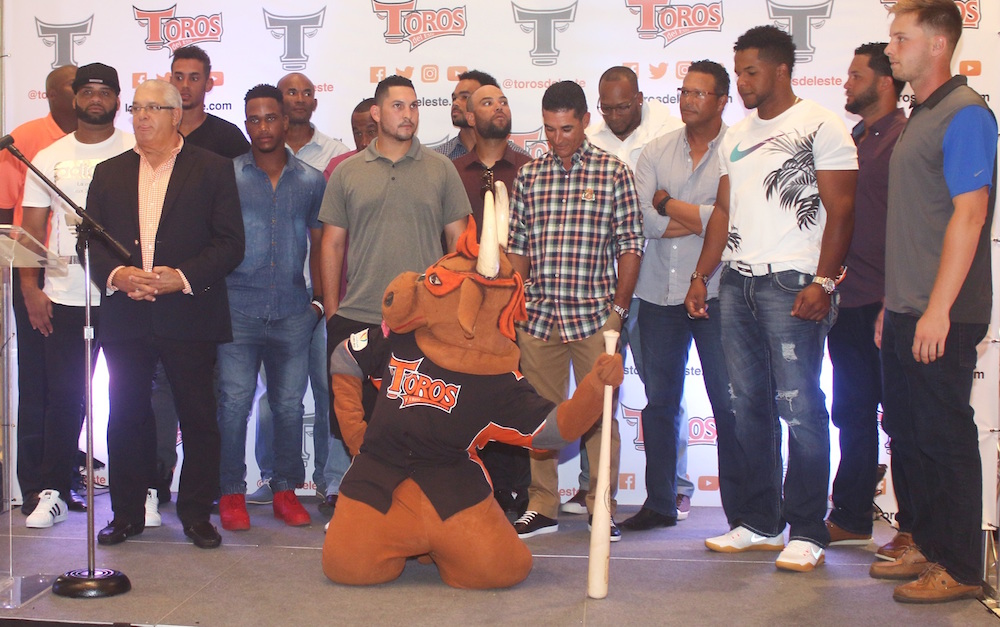 The Toros de Este recently held a press conference on Tuesday, October 11th at the Multiplaza in La Romana to officially present their team this year. Team manager, Mike Guerrero, stressed that with the talent and willpower the team has this year they will certainly go for the crown.

The next professional baseball tournament will commence tomorrow on October 20th with the BHD-Leon Cup. Luis Emilio Rodriguez Amiama, Chairman of the Board of Directors of the team, along with general manager Pablo Peguero, led the meeting with media representatives. Rodriguez Amiama noted the general management of the team and the Office of Baseball Operations has been given full support and they feel a winning team has been selected. The Central Romana Corporation delivered the team’s uniforms to the president of the Toros del Este  during the conference, and Peguero proclaimed hiring Guerrero will prove vital to the team’s success, and that with valuable veterans the team has great potential to win the title in the next championship.

“The talent of the Toros is abundant; we have many promising rookies and an example of that is that we were the team that debuted the most players in the majors last season,” Pablo Peguero said, “Further proof of the quality of our young players is that the next tournament will have Manuel Margot and Jorge Mateo, who were first selections of our team at LIDOM rookie draft 2014 and 2015, respectively. Don’t be surprised if our first pick this year, Sierra Magnauris also plays in the upcoming championship.”

In November, the team will also have star players Teóscar Hernández, Cristhian Adames, Abraham Almonte and Jefry Marte as part of the team’s lineup. Veteran pitcher, Raul Valdes is also expected to begin throwing early that month. The team has even received confirmation that Eduardo Nunez and Jose Ramirez will play in December.

In the conference, Aramis Liriano, representing the Cervecería Nacional Dominicana, a company that traditionally supports Los Toros, said that “Presidente beer has always accompanied Dominicans in their most important moments of celebration. Baseball is part of these celebrations. So we confirm our support for the Toros del Este and the rest of the teams; this is a celebration of pride and passion for all Dominicans.”

All Toros del Este games will be transmitted in Coral 39; Tele Oriente, channel 16; TVO channel 39 on national TV, as well as on Romana TV,  channel 42, HD Toros Claro 1095 and Tricom channel 1094. The team’s games will be narrated by Juan Julio Baez, Ernesto and Alberto Rodriguez Kranwinkel and commentators Mario Emilio Guerrero and Victor Baez. Máximo Contreras and Manuel de Jesus will be the commercial broadcasters. Victor Baez, Alberto Rodriguez and Tomas Cabrera will be in charge of the pre and post game and Nicols Peña of the interviews.

The radio transmission will be broadcasted on the station 107.5 FM of La Romana, with the support of La Voz de las Fuerzas Armadas, 102.7 FM in Santo Domingo and 106.9 FM, the rest of the country. In Bávaro Kool 106.9 FM. Juan Báez and Braulio Mejía will be the narrators and Rafael Torres commentator. Reymond Tejeda and Amós Anglada will be in charge of the pre game and Hector Collado will be the commercial broadcaster.

In the meeting with journalists, last season godmother Nicols Peña, passed on the team band to this year’s representative Melina de los Ángeles Elena González, who promised to support the team throughout the season.

It’s time to take out your orange outfits and get ready to cheer for our local baseball team, the Toros del Este! The championship starts tomorrow Thursday, October 20th in Santiago, but the very next day on Friday, October 21st the Toros del Este will be receiving the Estrellas Orientales in Francisco A. Micheli Stadium! So that means, get your tickets!! For those who cant make it to the stadium but still want to see how your team is doing, you can download DR Sports on Demand, an app by Lidom.tv. Where you can see all games live, or if you missed it you will still have it available in HD and where ever you are, whenever you like! Visit Lidom.tv to download.

Estrellas Vs. Toros
When: Friday 21st

Licey Vs. Toros
When: Monday 24th

Escogido Vs. Toros
When: Friday 28th

Licey Vs. Toros
When: Saturday 29th

Gigantes Vs. Toros
When: Wednesday 2nd

Aguilas Vs. Toros
When: Friday 4th

Escogido Vs. Toros
When: Sunday 6th

Estrellas Vs. Toros
When: Tuesday 8th

Licey Vs. Toros
When: Friday 11th

Estrellas Vs. Toros
When: Sunday 13th

Aguilas Vs. Toros
When: Wednesday 16th

Estrellas Vs. Toros
When: Saturday 19th

Aguilas Vs. Toros
When: Monday 21st

Aguilas Vs. Toros
When: Wednesday 23rd

Escogido Vs. Toros
When: Sunday 27th

Gigantes Vs. Toros
When: Wednesday 29th

Licey Vs. Toros
When: Thursday 1st

Gigantes Vs. Toros
When: Saturday 3rd

Gigantes Vs. Toros
When: Wednesday 7th

Escogido Vs. Toros
When: Thursday 8th

Gigantes Vs. Toros
When: Wednesday 14th

Aguilas Vs. Toros
When: Saturday 17th

Escogido Vs. Toros
When: Monday 19th

Estrellas Vs. Toros
When: Tuesday 20th

Licey Vs. Toros
When: Wednesday 21st

Tickets can be purchased at the website www.lostorosdeleste.com/abonos.html or making reservations through this phone number: 809-556-6188 / 89.