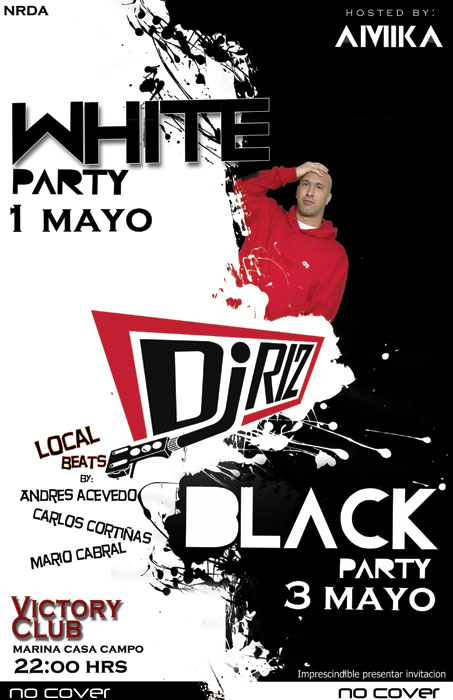 Lately the Victory Club at the Casa de Campo Marina has been a tad bit quiet. Usually the top notch clientelle that frequents the night club needs no fuss… they love the exclusive ambiance and they don’t need anything else to bring them out to enjoy a great night out in the Marina… but every once in a while its good to make a fuss… and the Victory Club is making a BIG ONE!

For this long weekend they have partnered with AMIKA Dance Club, one of the hottest spots in Santo Domingo and are bringing you not one but 2 parties this weekend!

First off on Friday April 1st they are having the always popular White Party and to switch things up a bit on Sunday April 3rd they’ll be having a Black Party!

The DJ lineup is off the chain! Manning the decks on both nights they’ll have local DJs Andres Acevedo, Carlos Cortiñas and Mario Cabral. The star of the night will be Crooklyn Clan’s DJ Riz!

Born and raised in Brooklyn NY, Canarsie native DJ Riz is one half of the infamous Crooklyn Clan.  From underground radio,commercial radio, nightclubs, and production, DJ Riz is a staple in the music industry and responsible for some of the biggest remixes in the clubs today.