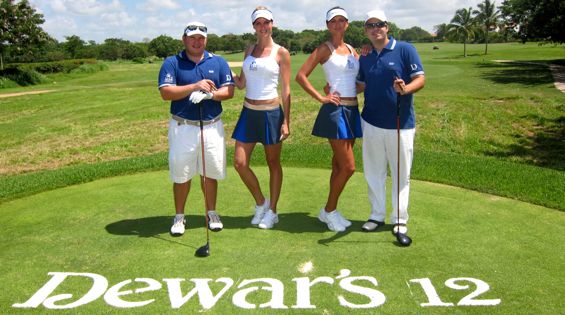 The legendary Dewars 12 Invitational Golf Tournament took place last weekend the 10th and 11th of June, beginning with a Welcome Cocktail at the Casa de Campo hotel pool, followed by a long hot sexy day of golf on the Teeth of the Dog golf course and an after party at a private Casa de Campo villa.

During the course of this event I took more than 800 photos and so over the next few days I will be publishing photos of all the different events and activities that made up this great golf tournament – now being heralded as the best in the country.
I have already published photos of the Welcome Cocktail Party, click here to view them.

So following a rather wild evening at the Welcome Cocktail, where the 136 golfers and various guests enjoyed Dewars 12 and La Aurora cigars, the golfing section of the event began bright and early with a breakfast at the 19th hole club house and before setting off on their golf carts loaded with Dewars 12, the golfers received the 12 Victoria’s Secret Models who arrived in a convoy of Volkswagen Touaregs and took the ‘saque de honor’ (the first putt to start the tournament.)

The 12 Victoria’s Secret Models get the tournament off to a sexy start!

Before the tournament began the 19th hole and the putting green was alive with action, here are a selection of my photos:
(As you can see from the photos, even though it was early in the day it was already incredibly hot.)

The golf tournament itself then took place over 7 hours on Casa de Campo’s Teeth of the Dog, during which time golfers were entertained by the Victoria’s Secret Models, as well as the various ‘stops’ along the way, which included a test drive station by Volkswagen Touareg, a cigar lounge by La Aurora, gourmet food stops by HUE Restaurant and M Kitchen Bar, numerous bars by Dewars 12 – including a British Pub and a ‘drive-thru’ bar.

Here are my photos of the actual golf:
(Photos of the ‘stops’ and the Victoria’s Secret Models will follow soon!