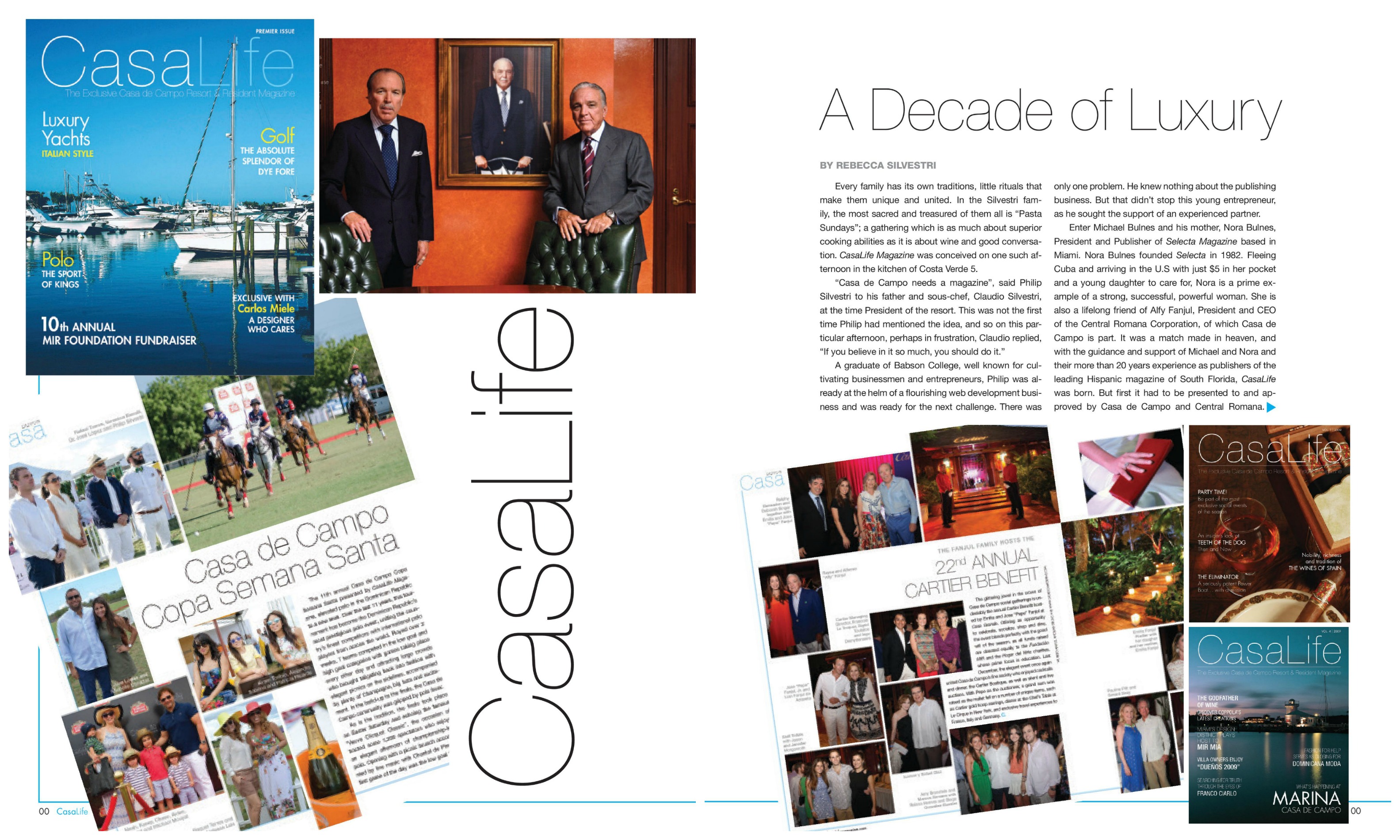 Every family has its own traditions, little rituals that make them unique and united. In the Silvestri family, the most sacred and treasured of them all is Pasta Sundays. A gathering which is as much about their superior cooking abilities, as it is about wine, and good conversation. CasaLife Magazine was conceived on one such afternoon in the kitchen of Costa Verde 5.

“Casa de Campo needs a magazine,” said Philip Silvestri to his father and sous-chef, Claudio Silvestri, at the time President of the resort. This was not the first time Philip had mentioned the idea, and so on this particular afternoon, perhaps in frustration, Claudio replied, “If you believe in it so much, you should do it.”

Founded a decade ago by Philip Silvestri with partners Michael and Nora Bulnes, publisher and founder of Selecta Magazine, Miami’s leading Hispanic publication, CasaLife is now celebrating its first decade! You can read all about it in the 10th anniversary edition of CasaLife which is out now.

Also included in this special edition of CasaLife Magazine is our coverage of all Casa de Campo’s latest events such as Duenos 2015, A Night For The Kids at Cafe Marietta, the Dominican-Dutch wedding of Arturo Quezada and Jorien, Salvatore Ferragamo in Altos de Chavón, the Altos de Chavón School of Design making a splash at Dominicana Moda and the launch of Cle de Cartier in Santo Domingo.

Meanwhile we also bring you an exclusive interview with the Mexican-Italian cinema Production Designer, Marco Niro, most notably known for being the mastermind behind the design of Titanic, Master and Commander, Troy, Jarhead, The Chronicles of Narnia and Resident Evil. Niro was recently in Casa de Campo filming the Dominican and US co-production of The Power of Darkness, a dramatic movie which is set to debut in theaters in 2016 and boasts a fabulous crew of internationally renowned actors and production specialists.

You can pick up a copy of CasaLife Magazine soon at the Casa de Campo Hotel, Minitas Beach, the Marina Casa de Campo and in Altos de Chavón, or your own personal copy will be delivered to your Casa de Campo villa shortly.