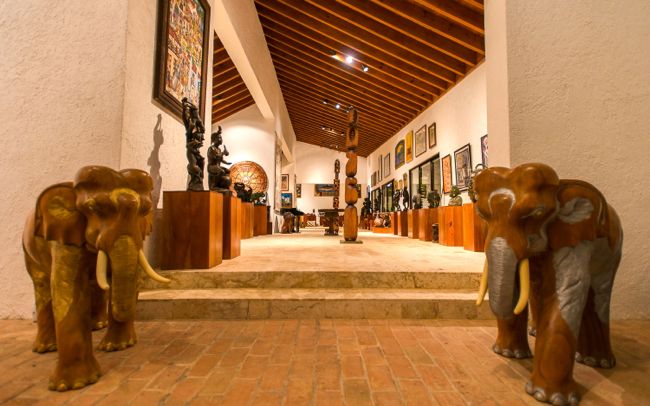 Last Thursday the 11th of April 2013, Casa de Campo villa owners, residents and vistors, as well as numerous real estate brokers came together at one of Casa de Campo’s most magnificent oceanside estates; Punta Minitas #34 for a cocktail party and art show hosted by Christie’s and Provaltur.

Punta Minitas #34, recently featured in a music video by Canadian rapper Drake, and reality TV show “Keeping Up With The Kardashians”, is a magnificent 6-bedroom property with private beach that is currently featured on the front cover of Christie’s International Real Estate magazine.

Christie’s and Provaltur represented on this occasion by Cesar Herrera and Rick Moeser, Vice President of Christie’s, hosted the cocktail and art show to showcase not only the incredible 35,000 sqft property, but also to give Casa de Campo villa owners, residents and brokers, as well as potential buyers the opportunity to view the impressive art works adorning all areas of the villa.

The guests sipped on champagne as the sunset over the bay and lit up the evening sky in a beautiful orange glow. And as the light faded to darkness, the invitees were treated to an unforgettable tour of the villa and it’s art collection housed in a specially created vault with steel doors – as well as in every room of the villa from the turret-style bedrooms to the open plan living spaces.

Leading the guided tour was acclaimed art critic Abil Peralta Aguero, a member of the International Association of Art Critics, as well as the Dominican Association of Art Critics, who was able to give an informative insight into the vast collection of art. Amongst the pieces from far reaches of the globe, were 3 by famous deceased Dominican painters; Gaspar Mario Cruz, Antonio Prats-Ventos and Candido Bido.

Also taking part in the tour was special guest José Luis Bidó, son of Candido Bidó, who was able to provide the guests with a unique insight into the work of his father.

The following collection of photos were taken at the cocktail and art show hosted by Christie’s at Punta Minitas #34 in Casa de Campo on Thursday the 11th of April 2013: