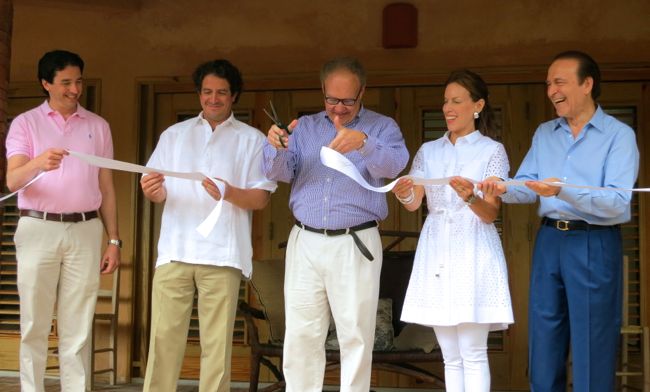 Last Saturday February 14th was a very busy day here in Casa de Campo… not only was it Valentine’s day, but it was also the Hogar del Niño weekend (click here for photos) and the 2nd annual Davidoff Art Weekend! If all that wasn’t a reason to celebrate and fall even more deeply in love with Casa de Campo, then we don’t know what is!

The Davidoff Art Initiative was launched in 2012 with the aim to support contemporary art and artists in the Caribbean, and so it was a great pleasure to see the Davidoff Art Residency in Altos de Chavón officially opened last Saturday February 14th.

The first 5 Davidoff Artists In Residence (Alia Farid, Nuria Montiel, Cathleen Mooses, Mathilde Rosier and Soledad Salamé), took up residence in Altos de Chavón in January, where they have been working in the new custom-built artist studios, designed by Adolfo Despradel, Director of Planning and Design, Costasur Dominicana S.A. And it was these studios which were officially opened last Saturday February 14th.

The occasion started with a tour of the studios when all the special guests, including art aficionados of the Casa de Campo community and international art journalists, admired not only the unique architecture of the structure, but also the works in progress of the 5 resident artists.

And then the moment came to officially declare the Davidoff Art Initiative studios open. Stepping forward to cut the ribbon was Hans-Kristian Hoejsgaard, CEO and member of the Board of Oettinger Davidoff AG, who was joined by Dominique Bluhdorn, Claudio Silvestri, Leo Matos and Eduardo Lima Jr.

“1 year ago I was here with a shovel and 1 year later, it’s open. Special thanks to Claudio Silvestri, Dominique Bludhorn and Stephen Kaplan, if it wasn’t for these three we would not be here today opening the studios”, said Hans-Kristian Hoejsgaard.

The opening of the Davidoff Art Studios formed part of the 2nd annual Davidoff Art Weekend which including a cocktail party at the Dye Fore terrace (photos and coverage soon), an art dialogue on the topic Caribbean Art: Past, Present and Future, as well as an art exhibit “SYNERGY” an excellent collaboration between the students and artists in residence of the Altos de Chavón School of Design, which remains open at The Gallery in Altos de Chavón.

“Our big hope is to make the Davidoff Art Weekend become a permanent feature of the Casa de Campo calendar, so that we may help to elevate the role art plays in this distinctive community”, added Hans-Kristian Hoejsgaard, CEO and member of the Board of Oettinger Davidoff AG.

We too certainly hope that we will be celebrating annual Davidoff Art Weekends for countless years to come.

The following collection of images were taken at the Davidoff Art Studios at the official inauguration ceremony which took place on Saturday February 14th 2015: