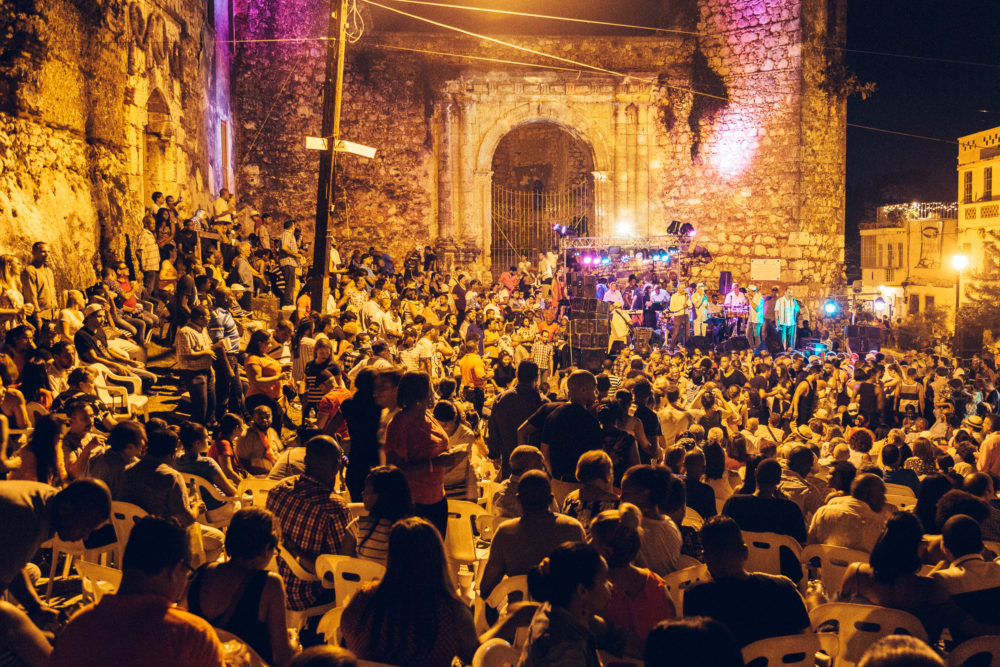 Going on for many years is Grupo Bonyé’s open-air concert in La Zona Colonial, in front of the ruins of San Francisco, originally a Franciscan monastery built in the early 1500s. What began as just a group of friends who met at El Sartén, dubbed “La Catedral de la Música Caribeña y el Hogar del Son” (the cathedral of Caribbean music and house of Son), to play for fun has turned into a tradition every Sunday night carried out by the Ministry of Tourism. The group formed by Félix Báez, Néstor Sánchez, Chino Mendez, Franklin Soto, and Roberto Bobadilla play Caribbean rhythms for the growing number of locals and tourists ready to enjoy a night of music and dancing.

Itching for a taste of local culture, a friend of mine and I hopped over to Santo Domingo’s historic district for just that. The hot and humid evening did not stop crowds of people from setting up tables and chairs surrounding the group and wooden platform for dancing. Admiring the artists’  dynamic and lively beats up on the steep hill of the ruins, we were swaying to the music in our seats. The beauty and personification of music was visible throughout the square, and one older, very talented gentleman dressed in classic “sonero” style with his white pants, two-toned shoes and wide-brimmed hat was such a joy to watch — radiating the beat from every muscle in his body!

It didn’t take long before we were on the dance floor ourselves dancing merengue shoulder to shoulder with many other couples. We highly recommend a visit to La Zona Colonial for this worthy experience— happening every Sunday from 6 p.m. – 10 p.m. Following several songs of dancing, we were off for some fresh air and dinner at one of the best restaurants in the city – Mesón de Bari. Click the video above to hear music by Grupo Bonyé and do yourself a favor and stop by in person for a night of music and dancing under the stars.